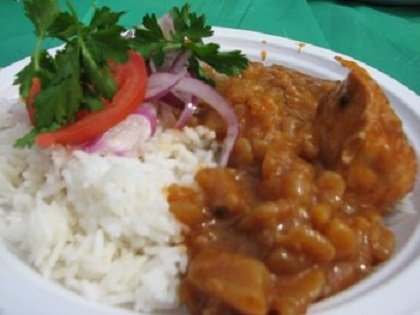 CNN — You've probably heard that eating multiple small meals throughout the day is a good way to stave off hunger and keep your metabolism revved up while trying to lose weight. But a new study could change your diet strategy.

Researchers from the Czech Republic followed 54 patients with Type 2 diabetes for 24 weeks. The study participants were split into two groups at random. Both groups followed a diet that reduced their energy intake by 500 calories per day and contained 50 to 55% carbohydrates, 20 to 25% protein and less than 30% fat.

For the first 12 weeks, one group ate three main meals - breakfast, lunch and dinner - and three small snacks in between meals. The other group ate a large breakfast between 6 and 10 a.m. and a large lunch between noon and 4 p.m. The two groups then switched for the second 12 weeks.

Researchers asked the patients not to alter their exercise habits during the study.

Although both groups lost weight and decreased the amount of fat in their livers, the group that was eating only two larger meals lost more during each 12-week session. Eating fewer, bigger meals also led to lower fasting blood sugar levels, meaning that the body's insulin production was working more efficiently.

The timing and frequency of the groups' meals did not seem to have an effect on the function of beta cells that produce insulin or on the glucose metabolic clearance rate - i.e. how fast their bodies were able to process and get rid of sugar.

"This is interesting," says CNN diet and fitness expert Melina Jampolis. "But the first thing I think of is that it's not really liveable, telling people to skip dinner every day."

Jampolis is also concerned that the two groups did not end up eating the same total number of calories. "Eating six times a day, it's very hard to control calories," she says. The researchers admit that while they did their best to ensure both groups consumed the same amount, the group that ate two larger meals may have eaten less.

While the study was small, Jampolis agrees that there's research to support eating a lighter meal later in the day. Most of us consume the majority of our day's calories late at night when we're the least active, she says. And when we're not active, our insulin sensitivity drops. A recent study showed that walking for just 15 minutes after dinner can help lower your risk for diabetes. Fasting between lunch and breakfast may have a similar effect, she says.

Don't skip dinner altogether. Focus instead on eating a hearty breakfast and lunch, and keep your last meal of the day low in calories.