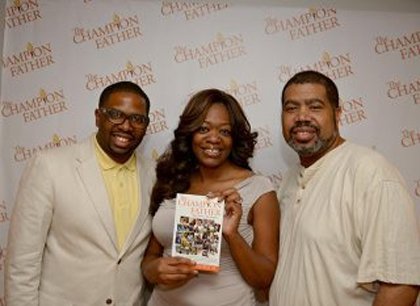 BALTIMORE — A father plays an essential role in the development and growth of a child. His presence for the monumental moments like a child’s first steps and first words are just as important as daily interactions like taking them to school and nightly tuck-ins.

On June 4, 2013, Baltimore native, author/motivational speaker/entrepreneur Kashaun Cooper released his book “The Champion Father,” that he hopes will help fathers along their journeys with their children. The inspirational book is designed to highlight fundamental tools in strengthening the relationships between fathers and their offspring. It also includes testimonials from men who have maintained healthy relationships with their children in the face of adversity.

When asked what led him to write the book Cooper says, “Through my non-profit organization Fathers Rock, Inc., I would hear amazing stories from fathers and how they were able to overcome certain obstacles to be a father to their child,” he said. “This compelled me to interview fathers across the nation, which concluded with one word, LOVE! My purpose is to show that being a father has many twists and turns, but what propels the champion father forward no matter what— is love.”

Unfortunately, in a society where more often than not a child lives in a fatherless home, Cooper hopes “The Champion Father” will encourage and inspire fathers to be more involved in their children’s lives.

Cooper, who is a father himself says, “For every father who reads ‘The Champion Father,’ my hope is that they will exit the book more empowered, knowing that they were born champions. And making the choice to become a champion father would put [their] child in the position of becoming a champion as well. I believe champion fathers create champion children, families and communities.”

Spoken like a true champion and man of courage, Cooper is humbled by the positive feedback his book has received and is inspired to continue spreading the message that no matter the path, all men have the potential to be champions.

To learn more about “The Champion Father” visit: http://www.championfather.net/index.html