BALTIMORE — Gabrielle Powell said it all began from a blog post four years ago.

Too many African American women were overweight, and very few appeared to be doing something about it.

“I think it was something like 80 percent of African American females were obese, so there was a movement to try and encourage black women to run and exercise,” said Powell, a Charm City native and an ambassador of the Baltimore chapter of Black Girls Run! 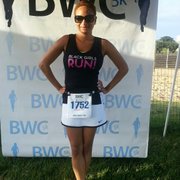 Gabrielle Powell is the ambassador for the Baltimore Chapter of Black Girls Run!

Now, the group has thousands of members in running groups across the country and on Sunday, June 23, 2013 more than 400 women participated in a 5K Women’s Run to encourage and celebrate fitness among black females.

“It was a big race, fun. Last year, we had about 242 participants and this year we got over 400 so it greatly exceeded our expectations,” Powell said.

But, women show up for more than just race day, Powell said.

On most mornings, the group gathers for regular runs in Baltimore, Howard, Harford, and Anne Arundel counties.

The women take their workouts seriously. The camaraderie and the health benefits are an added bonus.

“I’ve run like three ten-milers and I’m getting ready to do my first half marathon on Sunday,” said Angel Hunter of Washington, D.C.

Toni Carey and Ashley Hicks started Black Girls Run! as a blog for women in March 2009. The friends were concerned about the growing number of black women who were not taking the time to exercise or keep themselves in good physical condition.

Now, Black Girls Run! has become a nationwide movement and chapters are active in approximately 30 states, including Maryland.

The organization has a simple mission, which is to encourage black women to make healthy living and fitness a priority.

The U.S. Department of Health and Human Services reported that three out of four black women are overweight or obese, statistics the founders of Black Girls Run! say are troublesome.

“We put on special events like boot camps, Zumba and jazzercise,” Powell said. “We have social activities and we host meet and greets where we can get together and socialize.”

"We want to be able to reach out to the community to dispel the myth that black girls don't run," Powell said. "It's not just about losing weight but it's about saving your life, being able to exercise, to take down the numbers on the scale as well as what statistics shows us about obesity."

The best case end result would be to see the high number of overweight African American women decrease dramatically. “It’s all about health and we need to be conscious of our health,” she said.