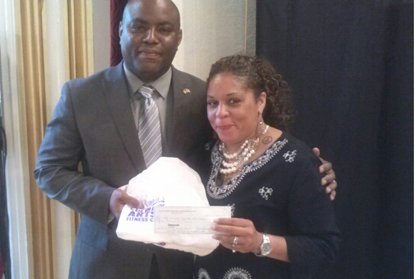 Things are cooking in a most unlikely setting— an elementary school.

Most of us have memories of terrible, unhealthy cafeteria food. There was even a time when ketchup was considered a vegetable.

Even now, there are some school children who turn their noses up at school lunches. They may be healthier, but many are far from palatable.

Enter Chef Connie, Baltimore's own "celebrity chef." She has taken school lunches to a new tasty level, by teaching elementary school children culinary arts. She shows the children that healthy foods can also be delicious.

The idea was born when Chef Connie Johnson proposed the idea before administrators at Calvin Rodwell Elementary School, located in the Howard Park community of Northwest Baltimore.

Chef Connie began working with the students, encouraging them to focus on healthy lifestyle choices, including delicious, healthy meals. About 50 students participated in the program called "Vegetable Time," which includes even kindergartners.

The program at Rodwell was so successful, it was featured in the HBO documentary “Weight of the Nation," which focused on the fight against obesity.

The school program began about four years ago and has been a success ever since.

Chef Connie has expanded the school program into a summer camp, with the cooperation of Gwynn Oak United Methodist Church. The camp opened June 24 and will run through August 5.

According to Chef Connie, this camp will feature "healthy meals/lifestyles, exercise, day trips, mentoring/tutoring and will help instill morals and ethics in young people."

She has the full cooperation of the church and its minister, DeLynne Hinton, who will provide the "spiritual component" to the camp.

This is the first year for the camp and Chef Connie insists that "this is not a babysittting camp. The children will come home dirty and tired. They will cook their own healthy snacks."

On Saturday, June 22, 2013, Chef Connie wanted to celebrate her sponsors and supporters, which include 100 Black Men of Maryland, MECU Foundation and Credit Union and ShopRite Supermarkets.

Will Hanna, president of the New Park Heights Community Association, presented the organization a check for $15,000.

She is especially grateful to Damion Cooper, a community liaison who brought much-needed funding to the summer program. He works in City Council President Jack Young's office. Cooper received a special recognition -- the Outstanding Community Outreach award -- from Chef Connie.

"This is the only program of its kind in the state. Chef Connie is helping to prepare these kids and we've gotta celebrate that! There is enough bad news around; it 's time we share and celebrate the good things that are happening with our children," Cooper said.

He admits to being "surprised" when he learned of the award. "This isn't about me," he insisted. "It's about what we do to help our children."

During the school year, the children in Chef Connie's program work in the teacher's lounge. She said, "ShopRite Supermarkets has promised us a state-of-the-art kitchen. The children will have a fully-equipped kitchen to work in."

She says, "I am a mother, an educator, a chef and an athlete and we must value our most precious gems, our children!"