Sew a part of history 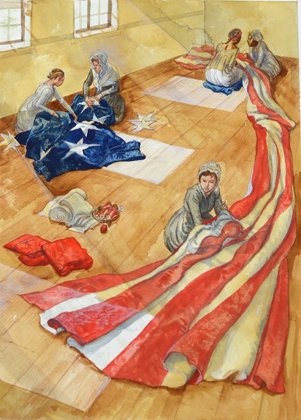 Once completed, the flag will fly over Fort McHenry National Monument and Historic Shrine and, along with the original Star-Spangled Manuscript, will be a part of the 2014 Flag Day celebration at the Smithsonian's Museum of American History in Washington, D.C.

"We are so fortunate, during the Bicentennial celebrations, to make an idea like this come alive!" says Kristin Schenning, MdHS Director of Education. "It means so much for our state of Maryland, and its place in American history."

The Maryland Historical Society has recruited more than 100 experienced quilters from around the country to construct the majority of the flag. The group will gather in MdHS' France Hall and, by working up to eight hours a day, will assemble the flag in three sections, including: the long stripes, the short stripes, and the blue field. Descendants of Mary Pickersgill are scheduled to participate.

On Saturday, August 3 and Sunday, August 11 from noon until 3 p.m. the general public is invited to come and add a stitch to the flag. During these days, MdHS will host the Fort McHenry Fife and Drum Corps, celebrity guest appearances, actors in period costume, exhibit tables from our friends and partners, and mobile food vendors outside of the

Museum. To register for the public days, visit www.mdhs.org/events.

"This is the ultimate participatory event," says President Burt Kummerow. "It will be a once in a lifetime opportunity. Visitors will be able to participate in the creation of an artifact that will become part of the nation's proud history."

Participants in the sewing days will also receive a stamp in the 1812 Bicentennial Passport, a free passport from the Baltimore National Heritage Area that includes over a dozen Baltimore-area historical sites.