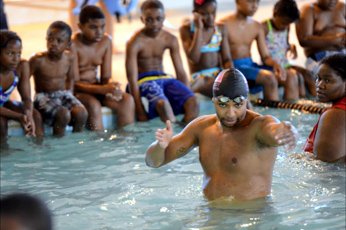 Olympic Gold Medalist swimmer Cullen Jones and Debbie Freed teamed up with Conner Cares Foundation to give swimming safety lessons to children in Baltimore City on April 27, 2013. The foundation is named in honor of Debbie’s late son, Conner, who drowned at age 5.

BALTIMORE — Debbie Freed lost her son in a drowning accident when he was just five years old. When Olympic Gold Medalist Cullen Jones was five, he nearly drowned.

Every minute, more than two people in the United States drown, incidents that have proven to be the leading cause of accidental death in America.

For Freed and Cullen, they share a similar mission.

They wish to prevent as many accidental drownings as possible.

The duo has teamed up with the Connor Cares Foundation, which is named in honor of Freed’s late son, Connor Freed, to give swimming safety lessons to Baltimore City kids.

“The thought of swimming is more of an activity than a life skill, and that’s the first thing we need to do is change that perception,” Jones said during a foundation event April 27 at Callowhill Aquatic Center where he also donated life-saving defibrillators to the city’s aquatic program.

“With my son, it didn’t have to happen,” Freed said. “He was floating under an empty lifeguard chair and one problem in Baltimore is that you have one lifeguard, usually someone 16 years of age, responsible for 50 people and there was no requirement for them to know about defibrillators which could have saved my son’s life,” she said.

Freed started the foundation and its mission is to further the education and training of lifesaving personnel at all public and private pools.

Freed said it was important, especially for inner-city youth.

“Cullen Jones talked about the need for swimming lessons because swimming is recreation and it’s done all the time,” Freed said.

At the event, Jones spoke passionately on such topics as diversity, black heritage, overcoming adversity, his Olympic journey, motivation and the importance of learning to swim.

"The thought of swimming is more of an activity than a life skill, and that's the first thing we need to do is change that perception," said Jones, who became the first African American to win a gold medal in the 50 freestyle at the World University Games in 2005.

In 2006, he became the first African American to break a world record in swimming in an olympic contested event at the Pan Pacific Games.

"Every child needs to learn how to swim because children are going to get near the water," Jones said.

Freed successfully lobbied to have legislation requiring every public pool in the state to have a defibrillator. The governor signed it into law last month.

The Connor Foundation had donated defibrillators throughout the state since its founding in 2006 and its goal is to have a defibrillator at every public and private pool nationwide, Freed said.

The Connor John-James Freed Scholarship Fund has sponsored over 400 children in Arlington Echo’s Drown- proofing Program in Anne Arundel County and the fund has provided an assortment of necessities for underprivileged children that otherwise could not afford the program.

A third program is currently underway that will benefit inner-city children in Baltimore.

The new defibrillators from Cullen were a welcome gift, city officials said. “The city of Baltimore is delighted to accept such a vital piece of equipment, which could mean the difference between life and death in an emergency,” said Ernest Burkeen, the city’s Recreation Parks director. “This life-saving equipment will be a vital resource for our aquatics staff and the citizens who use and visit the city’s swim facilities,” he said.

For more information on the foundation, visit www.connorcares.org.