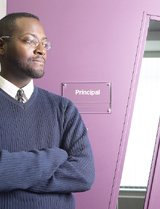 BALTIMORE — Kiera Wilmont a black, 16-year old straight-A student was handcuffed, arrested and charged with two felonies after her high school science experiment blew the top off a small water bottle. Kiera, an honor roll student has a reputation for being nice to everyone. She has never been in trouble with the law. However, she was expelled from school and charged as an adult. Kiera is black.

According to the police report, “At 7:00 a.m. Monday April 30, Kiera and a classmate mixed aluminum foil and toilet bowl cleaner in a small water bottle. After about 30 seconds, the reaction created pressure inside the bottle, blowing the cap off with a pop that according to witnesses sounded like firecrackers going off. The reaction created a small amount of smoke. No one was hurt.”

Science sites familiar with the experiment describe what to expect: aluminum in the foil reacted with hydrochloric acid in the cleaner. The reaction produces hydrogen gas, which quickly builds the pressure inside the closed bottle until the plastic can't take it any more and explodes outwards.

After the “explosion” Kiera tidied up and went to class thinking there was no problem. One can imagine her shock later in the day when police showed up to arrest, escort her off school grounds, and charge her with two felonies: possession/discharge of a weapon on school grounds" and "discharging a destructive device."

She was also expelled from school under a zero tolerance policy, which required immediate expulsion for any student in possession of a bomb (or) explosive device — while at a school (or) a school-sponsored activity— unless the material or device is being used as part of a legitimate school-related activity or science project conducted under the supervision of an instructor."

The aluminum foil and drain cleaner reaction is a popular high school experiment. “The problem seems to be that she wasn't doing the experiment under controlled safety conditions, as in class or with her teachers.” Kiera told police she conducted the experiment in preparation for an upcoming science fair.

Authorities said if she had performed the experiment “in her own backyard, there would never have been an issue. But, since Kiera lives in an apartment, she “didn't have access to any private outdoor areas.”

Public outrage over this well-publicized incident has been tremendous. It perhaps accounts for the fact that now Kiera will not be charged as an adult. At this time the felony charges are still pending. Her family is hopeful that the case will be dropped and she be allowed to return to school.

Things are looking brighter for Kiera. Her situation no doubt benefited from the national attention. Nevertheless, it makes one wonder how many other students suffer from an overzealous adherence to a policy that may or may fulfill its original intention.