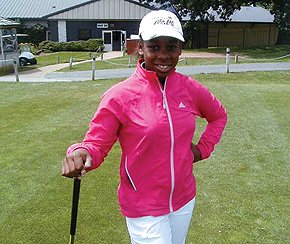 Kendel Abrams Abrams is "swinging" her way to the top.

BALTIMORE — Kendell Abrams may one day be a household name

Kendell Abrams is "swinging" her way to the top. The twelve-year-old won the qualifier for the Callaway Jr. Golf World Championship at Glenn Dale Golf Course in Bowie, Maryland earlier this year. Kendell's impressive victories also include a first place win in the 2012 Jimmy Flattery Jr. Golf Tournament. The victory marked the third time she has won the competition. She also won the event in 2010 and 2011.

Kendell also won a title at the US Kids Golf Tournament in Phoenixville, Pennsylvania, and was also selected as "Player of the Year" for the US Kids Philadelphia North Spring Tour. With Kendell's long list of impressive victories, it's hard to believe that the talented golfer has only been playing for three years, and initially wasn't interested in the sport.

"I thought golf was boring," said Kendell. "But I saw my brother play and thought I could beat him and started playing golf. I did beat him."

Kendell is referring to her older brother Khalil, who is also making his own mark in golf. Playing on his high school golf and tennis team, Khalil

recently participated in the Hank Haney International Junior Golf Academy in Hilton Head, SC. He was one of 51 students selected around the country out of 200 First Tee chapters. The First Tee golf program reaches young people ages 5-18 through golf instruction and life skills lessons administered at chapters, military installations, and to students in elementary schools.

In 2010, Kendell and Khalil were selected as Junior Course Reporters for the PGA's Champions Tour. The selection provided them with the opportunity to interview several distinguished golfers including Fred Couples and Tom Watson and PGA Tour Commissioner Tim Finchem.

Recently, Kendell and Khalil visited Capitol Hill for National Golf Day to discuss what golf means to them.

Kenny and Denise Abrams, are the proud parents of Kendell and Khalil. The couple are the owners of Abrams Insurance Company in Baltimore.

In July, Kendell will travel to San Diego to participate in the San Diego Junior World Golf Championship. The tournament provides an opportunity for junior golfers from all parts of the world to come together to play golf and share in cultural exchange.

Kendell has also been selected by the Tiger Woods Foundation to serve as a standard-bearer at the AT&T National Golf Tournament at the Congressional Country Club in Bethesda, MD this summer. Tiger Woods will be playing in the event.

"I like Tiger Woods a lot," said Kendell. "When I see him at the tournament, I don't know what I am going to say to him."

"I really enjoy being a golf caddy," said Kendell. "People get to know me, and it prepares me for tournaments."

She added, “Golfing is like an adventure. It's a long journey, but it gets better and better. I like competing because it's a great way to meet a lot of people and network."

In addition to golf, Kendell plays the cello, consistently makes the Honor Roll, and was a 2012 Carson Scholar.

"I always find time to get things done and study," said Kendell. "I usually try to get out on the golf course to practice at least three times a week and I always study. I see myself going pretty far because I am a hard worker. I also don't mind trying over and over again."

"I always tell kids to never give up," she said. "I also tell them they can't have a bad attitude, and they have to practice a lot."

Remember the name Kendell Abrams. At the rate she's going at such a young age, she could one day become a household name.