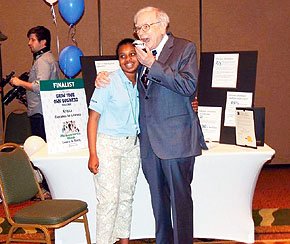 COLUMBIA — Not every 11-year-old knows how to make cupcakes, and it’s rare that a pre-teen comes up with such a sweet idea to raise money to help other children learn to read. Krissa Hillman is an exception. The 11-year-old Bollman Bridge Elementary School fifth-grader is working with the Maryland Center for Entrepreneurship to market her cupcakes in front of the rich and affluent, who may be able to help launch Krissa’s recipe.

“I’m so excited, that I’m shaking,” said Krissa, who dished out her goodies to a group of entrepreneurs at the Maryland Center on Friday, May 17, 2013.

Now, another opportunity of a lifetime has arrived.

Out of 4,000 children who range in age from seven to 16 who entered Warren Buffett’s Secret Millionaires Club’s, “Learn and Earn, Grow Your Own Business Challenge,” Krissa was selected to tell her story to Buffet on Monday, May 20, 2013 in Omaha, Nebraska. If selected by Buffett, Krissa will win $5,000 to help start her “Cupcakes for Literacy” business.

The Buffett challenge is a national competition seeking to help young entrepreneurs cultivate smart habits financially and it encourages young people to come up with unique new business concepts.

“Not everyone gets a chance to do this,” said Krissa, who will compete with four other students to win Buffett’s challenge. “I was like, it’s a one in a billion chance because there are so many great ideas and the fact that he picked mine really kind of touches my heart,” she said.

Krissa said she created her cupcake business in order to benefit reading programs, libraries and local schools. “Literacy is a big part of life. You have to read everything,” Krissa said. “So, what better way to help people understand that through something everyone likes?”

Entrepreneurs and leaders at the Maryland Center for Entrepreneurship (MCE) in Columbia, Maryland gave vital feedback to Krissa as she prepared to deliver her pitch to Buffett, the famous business magnate, investor and philanthropist who is widely considered the most successful investor of his time.

“Our role is to steer entrepreneurs in the right direction, but also give them what they need to sustain a business,” said Julie Lenzer Kirk, executive director of the MCE. “With Krissa, we want to give her all the support she needs and let her know that we will be there for her every step of the way.

For Krissa, the idea began after her mother purchased a cupcake recipe book for her at a school book sale. “Six years ago, I made a website called Storytime with Krissa to upload videos of her reading aloud,” Krissa’s mother, Sabrina Wilson said. “When she got the cupcake book, we decided to put a new spin on it.”

During a bake sale for a parent-teacher conference, Krissa was able to raise $258 during a six-hour period. She gave the money to the school’s library.

“It all sounds like something only someone high up in the business world would get to do,” Krissa said. “I get to meet Warren Buffett.”