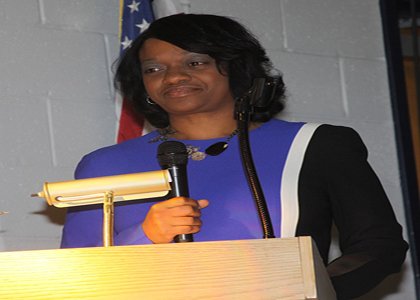 CAPITOL HEIGHTS, Md. — The mother of Washington Redskins quarterback Robert Griffin III urged families attending a homeownership workshop on Saturday, April 13, 2013 to live within their means focus on their dreams and never, ever give up— even when faced with adversity.

"No matter how low you start out in life or how many times you're knocked down, you can get back up again," Jacqueline Griffin told a standing-room only audience at HomeFree-USA's Keys to Success workshop sponsored by Bank America, with support from DHCD. "I know how hard it is when you're striving, when you have goals, and something happens. It's not what you go through, but how you go through it."

Griffin described how she and her husband believe in living frugal, faith-filled lives and raised their family with the same values. When her famous son hurt his knee after a Rookie of the Year season with the Redskins, she said, he turned to his parents and asked "Now what?"

"We told him, 'now comes the test for something greater,'" she said. "I know not everybody is going to be an RG3," she said, "But whatever your dreams, you have to nurture them."

Secretary Skinner joined Mr. and Mrs. Griffin and Capitol Heights Mayor Kito James at the daylong workshop in the Washington suburbs. The Griffins recently moved to the Washington region at their son's request.

HomeFree, like counseling agencies throughout Maryland, is helping prospective homeowners prepare for a strengthening economy, noted Secretary Skinner. After the collapse of the national housing market in 2007, members of the MD HOPE Counseling Network focused on foreclosure prevention. Today, counselors are helping families repair their credit, organize their finances and put themselves in position to buy the home of their dreams.

Programs such as the Maryland Mortgage Program can help families take that first step to homeownership through competitive rates and significant down payment and settlement cost assistance. Learn more.

"Buying a home may not be as far out of reach as you think," Secretary Skinner said. "And now is a great time to buy— with interest rates at, or near, historic lows and sales prices may never again be as low as they are now."