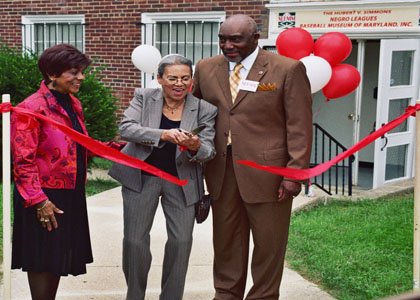 BALTIMORE — Some of the greatest players to play baseball are mostly unknown. Most of the names evoke few memories among the masses.

However, the Negro Leagues Baseball Museum of Maryland has been educating Baltimore residents and others about these unsung stars and the hundreds of others who roamed the diamond and became legends to baseball historians and fans.

“It’s just a great honor that there is a place like the museum where a person can go and learn about the Negro Leagues and the players, like myself, who were so honored to play,” said Johnson, who earned the nickname, “Peanut,” because of her petite frame while pitching for the Indianapolis Clowns in the 1950s.

The museum was founded five years ago by the family of Bert Simmons, who played for the Baltimore Elite Giants of the Negro Leagues and whose dream was a museum to honor the league’s players and its history.

“Bert’s dream came true with the opening of the museum,” Audrey Simmons, Bert’s widow, said in a recent interview. “I know he would be very proud of the progress we’ve made over the years and he’d also be proud of where we are going in the future,” Simmons said.

The museum is located at 3800 Patterson Avenue, and each year officials hold several special events, including “Back to the Old Ball Game,” in which it invites Negro League alumni and others to participate in autograph sessions, silent auctions and other functions.

The museum features life-sized displays of prominent Negro League players, uniforms, photos and other memorabilia. Also, the museum functions as a unique educational resource in Baltimore. Officials have collected, preserved and display photos, books, artifacts and other items that vividly tell the story of African Americans in baseball from the early 1800s to the present.

The popular museum also functions as an educational facility with a goal of developing, maintaining and exhibiting materials and artifacts focused on the history of blacks in baseball.

“Our activities are aimed at every level from school age children to adults and including educators, businesses, and community resource persons,” Simmons said, adding that the mission is to provide opportunities for research, exploration and advocacy and to encourage the efforts of children and adults to work together to create a community resource center in honor of the Negro Leagues.

“What people have to realize is that it was an honor for all of us to have played in the Negro Leagues,” said Johnson, who resides in Washington, D.C. “The history is important for so many reasons including the fact that it shows that our young people can do anything they want if they just put forth the effort.”