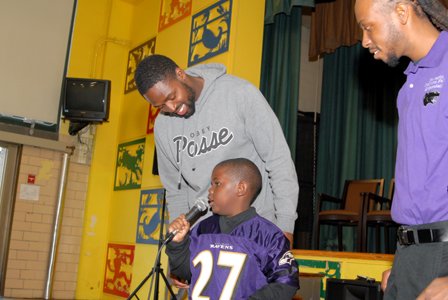 BALTIMORE — If Charles Bellamy IV was, it’s a safe bet that the Gwynns Falls Elementary School first grader did not want to be awakened.

Young Charles was the toast of the school after he won a Metro PCS and FAN radio contest, which afforded him the opportunity to bring Baltimore Ravens star wide receiver Torrey Smith to school on Tuesday, October 29, 2013.

“What made it even more special is that no one told the other students who the winner was or what was going on,” said Jay Hoffman, the regional vice president of sales and operations for Metro PCS. “The students gathered in the auditorium and they didn’t know why, but out came Torrey Smith.”

The contest, sponsored by the Community College of Baltimore County (CCBC), began in September. Parents and students in grades K-8 who attend school in Baltimore City, Baltimore, Howard, Carroll, Harford and Anne Arundel counties, were invited to fill out entry forms for a chance to bring Smith to school. Principals and teachers also could enter by filling out forms at any Metro PCS store in the area, according to the official rules.

On October 15, officials randomly selected Charles’ entry, which made him the coolest kid in the school.

“Their faces all lit up,” Hoffman said. “Charles’ mother and grandmother were there as well. It’s nice and Torrey Smith is the perfect spokesperson for education and this is also one way in which Metro PCS tries to give back to the community.”

Smith, a Virginia native and university of Maryland graduate spoke of his interests outside of football where he and the Ravens are trying to defend their Super Bowl championship.

The Ravens’ star and his wife, fourth grade teacher Chanel Williams, enjoy a history of advocating good education for children. Earlier this year, the couple posted a You Tube video to help encourage children to study for the Maryland School Assessment, a reading and math achievement test that meets the requirements of the federal No Child Left behind Act.

“Bring your pencil, get a good night’s sleep, eat breakfast, budget your test time, and re-read all the directions if you don’t understand the questions,” Smith urged students.

“Children can receive gift cards for a free pizza, we also have tablet giveaways and other things,” Hoffman said. “We’re constantly looking for ways to give back.”

For Charles and his schoolmates, the visit by Smith counted as a huge gift from Metro PCS, the Fan radio station and the Community College of Baltimore.

“It’s something they’ll remember for a long time,” Hoffman said