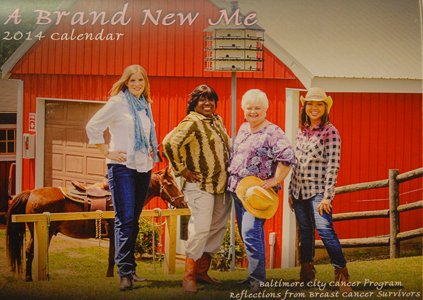 BALTIMORE — Meredith White had just one simple request when she first learned that she had breast cancer.

“I was 59 years old and I told the doctor that I wanted him to wait until I was 60 before doing anything. I just wanted to enjoy my 60th birthday,” said White, a Baltimore native who became the first patient of the Baltimore City Cancer Program, a community-based initiative of the University of Maryland’s Marlene and Stewart Greenebaum Cancer Center.

The program, which began in 2001, receives funding through the state’s Cigarette Restitution Fund Program, which includes the “Living and Loving Life Breast Cancer Support Group.”

“This program is nothing short of awesome,” said White, who noted that it’s important for everyone, including men, to understand that getting checked for cancer is far from a bad thing.

“Mammograms may hurt a little, it’s a little pinch, but it’s much better than not having it done at all,” White said.

“The awesome thing is that there is a very high survival rate and we’ve caught a lot of cancers very early which is a key to survival,” Boozer-Yeary said.

What’s frustrating for program coordinators and health care officials is the reluctance, or hesitance, of African Americans to come in for screenings, Boozer-Yeary said.

“We find many who will tell you that they have to die from something,” she said. “Then, you have those who say that mammograms hurt or they just don’t feel like or have the time to come in for a screening.”

Others complain of lacking adequate or any health insurance, but Jackson-Crute said that’s not a problem because the program offers free screenings.

Officials said they also are forced to contend with the myths surrounding cancer. “One myth is that if a person has cancer and surgery is performed, once the air hits the cancer it’s going to spread anyway,” Boozer-Yeary said.

Since its inception, the cancer program, which celebrated the release of its 2014 calendar with a “Cupcakes and Courage” event on Tuesday, Oct. 29, have screened more than 30,564 Baltimore City residents.

“We’ve also done 375 free colorectal screenings, with no cancers, of those 113 breast individuals have been diagnosed with cancer, eight cervical cancers and two with oral cancer,” Jackson-Crute said.

The program and its support group’s success can also be measured by the familial way in which patients and their loved ones are treated, White said.

“When I was diagnosed, I decided that I was going to live and the people in the program were with me every step of the way. They became a part of the family,” said White, who was featured in the 2012 calendar.

“They still check on me and my family all of the time and I just love them.”

The 2014 calendars count as another fundraising tool to help the program remain successful. The survivors included in the calendar are treated to a professional photo session complete with wardrobe and hair stylists and make-up artists who donated their time and vast talents to the cause.