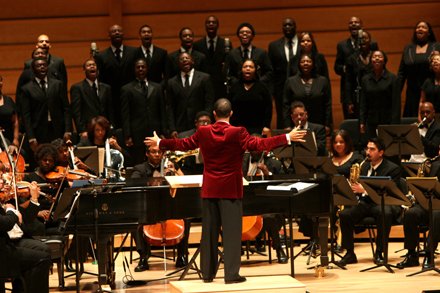 BALTIMORE — On Wednesday, October 30, 2013, Soulful Symphony founder and artistic director, Darin Atwater received one of the region’s most prestigious awards— the 2013 Top 100 MBE Prestige Award. The Prestige Award is intended for an individual who brings prominence to the region and has obtained national recognition. It is a celebration of their accomplishments and their stature as a role model. It is recognition of their demonstrated successes and their ability to brand through their many diverse projects. 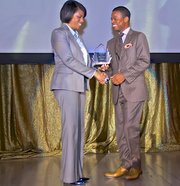 Photo Courtesy: Office of the Mayor

Darin Atwater receives the 2013 Top 100 MBE Prestige Award from Baltimore Mayor Stephanie Rawlings-Blake on Wednesday, October 30, 2013 during a ceremony at the mayor’s Supplier Diversity and Inclusion Week at the War Memorial in downtown Baltimore.

Atwater has earned a distinguished international reputation as Artistic Director, Pianist, Composer, Conductor and Cultural Advocate for the Arts all while single-handedly redefining what has remained a quintessentially European art form: the symphony orchestra.

In 2000 Atwater founded Soulful Symphony, an 85-member orchestra with vocals made up of mostly African American and Latino musicians. After 10 wildly successful seasons of sell-out performances in a joint venture with the Baltimore Symphony, Soulful Symphony is now the first resident ensemble at the France-Merrick Performing Arts Center where the organization has entered into a historic partnership with Hippodrome Foundation, Inc.(HFI) and Broadway Across America.

Atwater is honored to be receiving the 2013 Prestige Award. He said, “Baltimore has been so good to me, so supportive. We started Soulful Symphony as a dream in 2000. With art and music in general, audiences are dwindling. So the fact that the citizens of Baltimore and beyond have been coming in droves to support culture and art makes as much of a statement as the music. To me, receiving this award says that what you do as an artist can become something larger, part of the cultural fabric of the community.”

Soulful Symphony’s next concert, “Soulful Holidays” will be on Saturday, December 14, 2013 at 8 p.m. at the Hippodrome Theatre. The concert captures the magic and wonder of the holidays with original orchestral arrangements, magnificent vocal performances, spectacular dancing, and the incredible sounds of Soulful Symphony. The concert reflects a broad range of holiday music while incorporating rousing renditions of Christmas carols and traditional holiday favorites. The orchestra will perform the final concert of the 2013/2014 Concert season on May 3, 2014. This concert, "So Many Stars,” will benefit HFI programs that serve thousands of students every year.