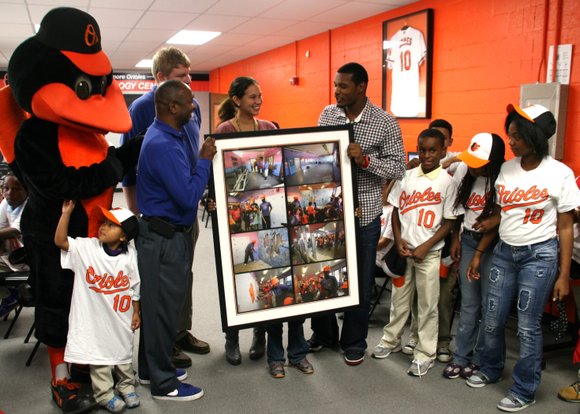 Jones joined youth from the club in a ribbon cutting ceremony at the facility, located at 3560 3rd Street in Baltimore, this Wednesday, November 6, 2013.

Improvements at the expanded facility include 20 new computers, a new ceiling, fluorescent lights and carpeting. The Orioles also donated a player-used, autographed and authenticated regulation size ping-pong table to the Club.

The new Technology and Learning Center will enhance the Boys and Girls Club’s ability to provide educational support, computer skills development and career enrichment, college preparatory and STEM (Science, Technology, Engineering, Math) programs to its at-risk and underserved members. The Center will also be utilized by community members for employment searches, financial literacy, GED and career and educational support.

The Brooklyn O’Malley Boys and Girls Club will partner with institutions of higher learning, local libraries, corporate partners and Baltimore City Public Schools to recruit adult participants as volunteers and mentors for the facility.

Jones along with other Baltimore Orioles players Chris Davis and J.J. Hardy won Silver Slugger Awards for the 2013 Season.

“It is a tremendous honor and with all of the great Orioles outfielders of the past, I’m surprised that I am the first to win one,” said Jones. “While it is a great individual honor for all three of us, the ultimate goal is to win games and bring a championship to Baltimore.”

Jones also won his third career Gold Glove Award after leading American League (AL) centerfielders in games, assists and putouts, and ranking third in fielding percentage. It is the third time in the last four seasons he has led AL centerfielders in putouts.