Flair Dancers will ‘Dance the World’ 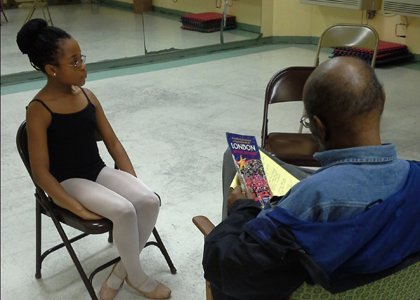 Morgan Cruise has been dancing at Flair for two years. She will perform in the annual extravaganza called “Dance The World” at Walt Disney World in Florida next year. Courtesy Photo

You can bet relatives and friends of Diamond Tomlin and Morgan Cruise have circled the dates: June 29 to July 2, 2014.

That’s when both girls will travel to the Walt Disney World Resort in Florida to perform in an annual extravaganza called “Dance The World.”

Tomlin is a nine-year-old fourth grader at Hilton Elementary School; Cruise is a 10-year-old who is being home schooled. Both girls learned their dancing at the Flair Dance and Modeling Agency in Catonsville.

Regular readers of this column are no doubt already familiar with Flair. Willia Bland started the studio in April of 1968, shortly after the assassination of Martin Luther King, Jr.

Bland felt that King’s death created so much sadness in black America that she felt inspired to create something positive. A model herself, she decided to open a modeling school for black women and girls.

The dancing component was added later. For the past 45 years, Flair has been teaching modeling, dance, etiquette, poise and elegance to at least two generations of girls of all races and ethnicities. It’s a track record not equaled in these parts.

Diamond has been dancing at Flair for five years. She also attends the arts camp Flair runs for girls every summer. Of all the dances she has learned at Flair, Diamond prefers tap and modern dance. Her dance rehearsal schedule keeps her pretty busy. Two days a week, she attends practice sessions at Flair.

On Saturdays and Sundays, Diamond attends rehearsals in Annapolis, where she is scheduled— for the second consecutive year— to appear in a holiday production of “The Nutcracker.”

“Last year I played a princess and a Chinese stick,” Diamond said. “This year I’m playing a mouse, a fairy and a cookie.”

Diamond was selected for the cast after auditioning with hundreds of other dancers.

“She’s an amazing dancer,” Janna Thompson said of Diamond. “She has a lot of energy.” Thompson should know. She is not only Diamond’s dance teacher, but she also teaches ballet, hip-hop and adult aerobics to intermediate classes at Flair.

Thompson says she values “stage presence” over technique when evaluating dancers, adding “Diamond is always on stage. She has performing in her heart.”

Not that Diamond is one to skimp when it comes to technique.

“She’s one of those students who, if I give her something to do and she doesn’t get it right away, she’ll go home and practice it,” Thompson said of Diamond.

I’m not kidding about the golfing. Morgan said she has played golf the last four years, along with her brother and a cousin. Her mom got her started in it. And, Morgan said, she’s quite good at the game.

I will never get into a golf game with Morgan Cruise. I tried playing golf only once, and set the game back at least 500 years.

But back to Morgan’s dancing: while at Flair, Morgan has had the opportunity to dance in Philadelphia’s Thanksgiving Day Parade and in the Cherry Blossom Festival Parade in the nation’s capital.

Morgan said her favorite dance is tap, which might be why she picks up the art form so quickly.

Morgan might not realize the compliment that Travis paid her. Mari Andrea Travis is a SUPERB tap dancer; if you’ve never seen her tap dance, then you’ve been missing out on quite the treat.

Chances are few of us will get to see Diamond and Morgan perform at “Dance The World,” but maybe some enterprising soul will record their performances for us.