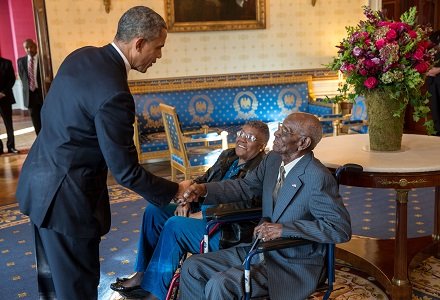 "If man had it, I'd have been dead, but God's got it, and he's keeping me well," said Overton, believed to be the oldest known American veteran of the war.

And in his more than century of life, he's seen both the good and bad.

"He was there at Pearl Harbor when the battle ships were still smoldering. He was there at Okinawa. He was there at Iwo Jima, where he said. 'I only got out of there by the grace of God,' " President Obama said Monday during a Veterans Day ceremony at Arlington National Ceremony honoring Overton.

Overton volunteered for service in 1942, becoming a member of the Army's 188th Aviation Engineer Battalion, an all-black unit that served on various islands in the Pacific.

He doesn't enjoy thinking or talking about it, telling CNN he "forgot all that stuff."

"When the war ended, Richard headed home to Texas, to a nation bitterly divided by race. And his service on the battlefield was not always matched by the respect that he deserved at home. But this veteran held his head high," Obama told the crowd of roughly 4,000 people.

Overton visited Washington for the first time earlier this year. His first stop was the World War II Memorial. Then he saw the Martin Luther King Jr. Memorial.

"As Richard sat in a wheelchair beneath that great marble statue, he wept. The crowd that gathered around him wept, too," Obama said Monday as he described the veteran's visit. "To see one of the oldest living veterans of World War II bear witness to a day, to the progress of a nation that he thought might never come."

Monday's audience gave Overton two standing ovations for his service. At the end of the day, he spoke to CNN while taking in the World War II Memorial at night.

Overton said he was happy to meet the President.

"I didn't think there (was) gonna ever be a black president," he said, "but it finally did happen."

And, while giving credit to God for living well over 100, Overton says he doesn't take any medicine and enjoys his vices.

"I drink whisky in my coffee. Sometimes I drink it straight," he said. "I smoke my cigars, blow the smoke out -- I don't swallow it."