Diabetes spreading around the world 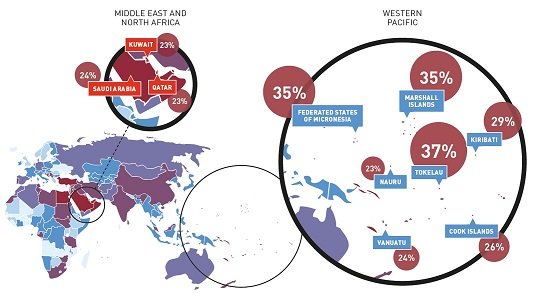 CNN — On World Diabetes Day, news about the disease's global impact is dire.

An estimated 382 million people worldwide have diabetes, according to a new report from the International Diabetes Federation. The IDF expects that number to rise to 592 million by 2035, when one in every 10 people will have the disease.

"Diabetes in all its forms imposes unacceptably high human, social and economic costs on countries at all income levels," the report authors begin in the executive summary. They go on to say that this latest edition of the Diabetes Atlas "carries a bitter but unavoidable message: despite the array of tools at our disposal to tackle the disease... the battle to protect people from diabetes and its disabling, life-threatening complications is being lost."

Epidemiologist Leonor Guariguata, project coordinator for IDF's Diabetes Atlas, wasn't surprised by the report's findings. In fact, she says the estimates are conservative, and that diabetes may be a much bigger problem than we think.

"The thing that strikes me is that we keep saying the same thing again," she said. "Every time we produce new estimates, they are above and beyond what we had projected from past estimates."

There are three types of diabetes: Type 1, Type 2 and gestational diabetes.

People who have Type 1 diabetes do not produce insulin, a hormone the body needs to convert sugar and starches into energy. Type 1 diabetes used to be called juvenile onset diabetes because it is usually diagnosed in adolescence. Around 5% of the diabetic population in the United States has Type 1 diabetes.

People with Type 2 diabetes have developed a resistance to the insulin their body produces. Most people who develop Type 2 diabetes are adults, although experts worry about the increasing number of young people being diagnosed.

Gestational diabetes occurs during pregnancy and can increase both the mother and baby's chances of developing Type 2 diabetes later in life.

According to the IDF report, China, India and the United States top the list for the most cases of diabetes per country; around 24.4 million Americans had the disease in 2013. But islands in the Pacific have the most alarming rates of prevalence, or the number of cases compared to the country's population overall.

For example, 37.5% of the population of Tokelau, located northeast of Fiji, has diabetes. Micronesia, Saudi Arabia, Kuwait and Qatar also reported higher-than-average prevalence rates. A large part of this is due to the growing obesity problem; while all types of diabetes are on the rise, the number of people with Type 2 diabetes is expected to double in less than 25 years.

"We started seeing big increases in prevalence in those islands maybe 20, 30 years ago," Guariguata said. "That coincides with rapid development." The discovery of natural resources on the islands, she explained, led to an influx of money in the population. People started eating more imported foods and moving less.

But diabetes is no longer considered just a rich man's disease, Guariguata said. Approximately 80% of the people living with diabetes are in low- and middle-income countries.