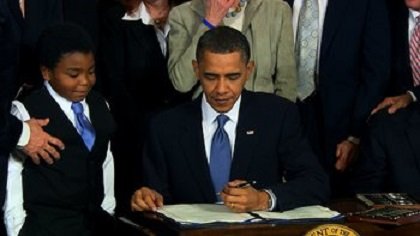 President Barrack Obama signs into law a sweeping bill overhauling the U.S. medical system at the White House on March 23, 2010. Among other provisions, the law requires most Americans to purchase health insurance. CNN

NEW YORK (CNNMoney) — Some 106,185 people signed up for Obamacare in its first month of operation, a period marred by major technological problems with both the federal and state enrollment websites.

Fewer than 27,000 Americans selected an insurance plan through the federal healthcare.gov site, which is handling enrollment for 36 states, according to figures released Wednesday by the Obama administration. The site is still far from fully operational, leaving tech experts racing to get it working by month's end, as the administration promised.

Nearly 79,400 people signed for coverage through state-based exchanges, with California leading the way with nearly 35,400 selecting a plan.

These figures reflect people who have selected insurance plans through the exchanges, but not necessarily paid for them. Americans have until Dec. 15 to pay if they want coverage to begin on Jan. 1. Open enrollment lasts through March 31.

In addition to the sign-ups, nearly 975,500 people have submitted applications and learned whether they are eligible for subsidies, but have not yet selected a plan.

The initial figures are a far cry from the 7 million people the Congressional Budget Office projected would gain coverage through the exchanges in 2014.