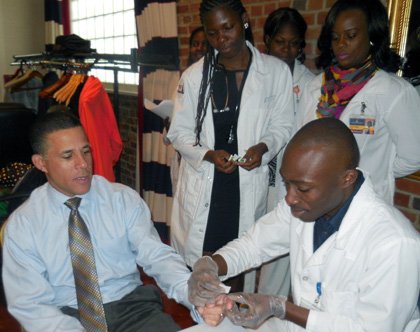 ANNAPOLIS — Six months after he was honorably discharged from the U.S. Navy, a young decorated veteran lay on the floor with a 1600 sugar level fighting for his life. That was two years ago and since then, Maurice Hunt has become the brainchild behind a national organization, Diabetes Awareness Project. That near-death experience has energized the Navy vet to educate the public on the disease called “The Silent Killer.”

The diabetes advocacy, education and testing organization had a major presence at last week’s Maryland Legislative Black Caucus Weekend in Annapolis. Hunt and the organization launched a nationwide “TestaMillion” campaign to test one million people for diabetes. Morgan State University’s (MSU) Nursing Program administered the glucose testing on behalf of “TestaMillion” and tested dozens of participants.

Delegate Shirley Nathan-Pulliam, a national expert on health disparity legislation, was responsible for the organization’s presence and for the diabetes testing it performed for the public at the conference. “TestaMillion is a very important testing and educational health initiative, and I’m proud that it started here in Maryland,” said Delegate Nathan Pulliam. “Diabetes is so dangerous because it attacks so many body functions and its symptoms are often not detected. Diabetes is called the silent killer because it symptoms often go unchecked. Diabetes can cause blindness, kidney disease, amputation, gum disease and tooth loss, skin diseases, heart attack and stroke.”

Morgan State University’s nursing program has formed a strategic partnership with Diabetes Awareness Project and TestaMillion and has agreed to assist in administering glucose testing and testing for hypertension throughout the Maryland. Nursing students from Morgan, under the supervision of their clinical professors, tested Lt. Governor Anthony Brown and several dozen participants in Annapolis at and he commended the student for pursuing careers in health care.

“We are pleased that TestaMillion has chosen us to help deliver this most important testing and educational health initiative” said Morgan Professor Pauline Aquil-Preston. “Our nursing students are getting practical experience in helping to curb diabetes that is a worldwide epidemic. Morgan State University is producing the next generation of competent nurses that will help deliver tomorrow’s health care services.”

Diabetes is a disease that occurs when the body cannot produce insulin or use it properly. Insulin is a hormone necessary to convert blood sugar, or blood glucose, into energy. Blood glucose is made in the body from the sugar, starches, and other food we eat.

“Diabetes is a very serious health issue in Maryland and throughout the USA and it is the major cause of heart attack and stroke,” said Lt. Governor Brown. “To reduce the incidence of this disease, it starts with programs just like this that promote testing and educating the public on ways to detect and prevent the disease. I got tested and support the mission of TestaMillion and Diabetes Awareness Project because many Marylanders are unaware that they have the disease.”

“November is Diabetes Awareness Month, and as a veteran of the Iraq and Afghanistan Wars, I am particularly sensitive to the rise in diabetes and its complications among our veterans,” said Maurice Hunt, president and founder of Diabetes Awareness Project. “The number one claim paid out by the VA throughout the U.S. is for diabetes and many Vietnam vets are struggling with the disease. We are grateful to Lt. Governor Anthony Brown for his support and endorsement, especially since he is an Army veteran.”