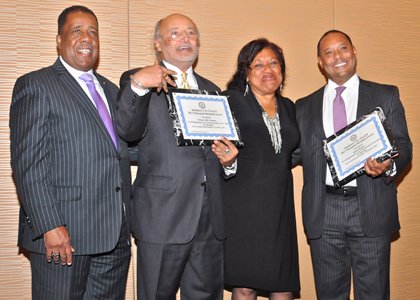 BALTIMORE — More than 500 people gathered at the downtown Baltimore Hilton on Thursday, November 7, 2013 for the Baltimore City NAACP Annual Freedom Fund Banquet, the largest fundraiser held each year by the local branch of the civil rights organization. The event featured a VIP reception attended by this year’s honorees, corporate sponsors and NAACP dignitaries from across the state.

“This Freedom Fund Banquet is one of our best,” said President Tessa Hill-Aston. “We’re focused on energizing our members and supporters to prepare for the important state elections next year. We had a very successful legislative session this year but the much-needed work of equality and justice continues. It will make a big difference, who represents us in Annapolis and as statewide office holders.”

Maryland State NAACP President Gerald Stansbury called the evening a “great opportunity to pause and celebrate our victories and honor some outstanding people who’ve made extraordinary contributions to the fight for civil and human rights.”

Hilary Shelton, director of the NAACP Washington Bureau and vice president for advocacy and policy gave keynote remarks remembering the hard fought legal cases that have led to a more “just and equal” country and shared the national agenda for the NAACP on capitol hill.