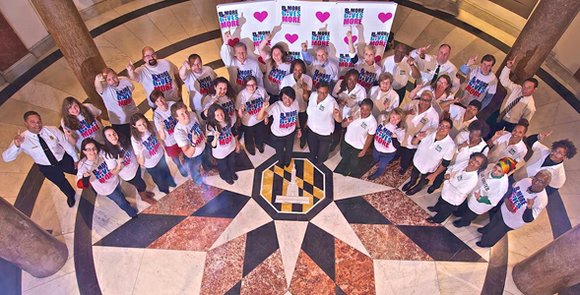 Photo Caption: Baltimore Mayor Stephanie Rawlings-Blake and more than 15 businesses and non-profits participating in the “BMoreGivesMore” campaign encourage residents to donate during the second annual #GivingTuesday initiative on Tuesday, December 3, 2013. The goal is to raise $5 million to benefit Baltimore charities making Baltimore the nation’s most generous city. Courtesy Photo/Office of the Mayor

BALTIMORE — At least 15 businesses and nonprofits are doing more than just encouraging Charm City residents to open their hearts and wallets; they are joining forces to help raise $5 million to benefit Baltimore charities on GivingTuesday— better known as #GivingTuesday.

The second annual #GivingTuesday initiative, which takes place on December 3, 2013 seeks to raise funds to benefit local charities and to make the city, whose slogan for the 2013 event is, “Bmore Gives More,” the most generous in the nation on that day.

“Our mission at GiveCorps is to build an army of givers to power their communities. We're creating a culture of contribution in our beloved hometown of Baltimore, and in the college and university communities we serve,” said Jamie N. McDonald, the founder and president of GiveCorps, which provides institutions of higher education the power to motivate connected constituents to give, act and share.

GiveCorps officials are leading the “#GivingTuesday” effort and have brought together a diverse group of organizations, including The Associated Jewish Community Federation of Baltimore, Constellation, the United Way of Central Maryland, Maryland Nonprofits, and the office of the Mayor and Business Volunteers Maryland, to raise awareness for the initiative and to help reach the $5 million fundraising goal.

The initiative started nationwide in 2012. Following the pattern of Black Friday, Small Business Saturday and Cyber Monday, Henry Timms, the deputy director of the Jewish Community Center 92nd Street Y, and Kathy Calvin, CEO of the United Nations Foundation, came up with the idea to create a national day of giving

“When we learned about the inaugural ‘#GivingTuesday’ campaign last year, we were motivated by its mission to generate as much passion for giving during the holiday season as there is for shopping,” McDonald said.

“The funds raised had a real impact on many Baltimore charitable organizations, providing much-needed resources to serve those in need. And we were not alone, across Baltimore; organizations launched ‘#GivingTuesday’ campaigns. In fact, our colleagues at The Associated: Jewish Community Federation of Baltimore led the country as the biggest ‘#GivingTuesday’ fundraiser, raising $1 million,” she said.

The campaign kicked off on October 25 during the Waterfront Partnership of Baltimore’s Fall Fling at the Inner Harbor.

The $5 million goal might be ambitious, but it’s achievable, and it will make a difference for those in need, McDonald said.

“Baltimore City is proud to stand alongside GiveCorps and its partners as they rally Baltimoreans to donate on one single day to raise money to benefit our local charities and programs that do so much good for our community,” said Baltimore City Mayor, Stephanie Rawlings-Blake. “During this season of giving, I encourage those who can give, consider donating to the cause or program that means the most to them on Dec. 3 to benefit those in need,” the mayor said.

On December 3, residents will be asked to visit: www.bmoregivesmore.com, to select the nonprofit they want their donation to benefit on #GivingTuesday. In return, those who make a donation to a nonprofit on the GiveCorps site, will receive a thank you from participating local business in the form of discounts and coupons that will be continually updated throughout the day to encourage repeat donations. Participating businesses to date include: Tapas Teatro, Birrotecca and Gertrude’s.