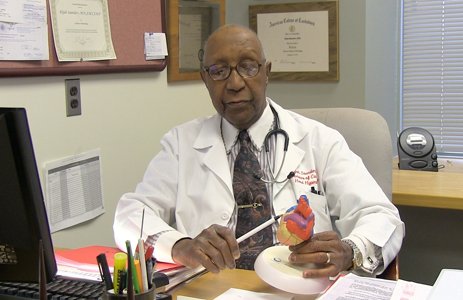 BALTIMORE — Heart disease is the number one killer in America, but diabetes is the number one root cause of heart attack and stroke. These facts and others related to heart disease are brought to light in a new documentary film now in production, “Faces of Diabetes” commissioned by Diabetes Awareness Project.

Dr. Elijah Saunders, a board certified cardiologist and professor of medicine at University of Maryland Medical School was recently interviewed for the film and has a significant role throughout the documentary. He reveals that there is a connection between diabetes and hypertension. “Hypertension [high blood pressure] can often lead to and make worse many complications of diabetes, including diabetic eye disease and kidney disease. Most people with diabetes develop high blood pressure during their life.

“Diabetes makes high hypertension and other heart and circulation problems more probable in that diabetes damages arteries and makes them targets for hardening (atherosclerosis). Atherosclerosis can cause high blood pressure, which if not treated, can lead to blood vessel damage, stroke, heart failure, heart attack, or kidney failure, Dr. Saunders continued.”

Saunders is a pioneer in research related to African Americans and hypertension. He is a founding member of The International Society of Hypertension In Blacks (ISHIB) and is recognized as an expert on hypertension, especially as it relates to people of African descent.

“There is without question a connection between diabetes, heart attack and stroke,” stated Dr. Saunders. Between 65 percent and 85 percent of people with diabetes will ultimately die of either a heart attack or stroke. Diabetes is a disease that can damage the blood vessels. Higher blood sugar levels help to build up cholesterol and as plaque builds up they clog the arteries, called atherosclerosis or hardening of the arteries.”

The “Faces of Diabetes” documentary uncovers the underlying causes and complications of the diabetes epidemic in the United States and throughout the world. According to Center for Disease Control, there are approximately 26 million children and adults in the United States with diabetes or roughly 8.3 percent of the population. The CDC reveals that an estimated 79 million people have pre-diabetes. According to Dr, Saunders, most diabetes can be managed through medication and some symptoms can be reversed with a regiment of exercise and diet.

In 2011, Dr. Saunders received the prestigious Herbert W. Nickens Award from the American Association of Medical Colleges. The award is given to an individual who has made outstanding contributions to promoting justice in medical education and health care equity in the United States. For more than three decades he has served as professor of medicine and also heads the hypertension section of the Cardiology department at the University School of Medicine.

“Faces of Diabetes” is scheduled to be released in 2014 and interviews patients struggling with diabetes, the physicians who treat them, and family members of diabetics.

For more information on the connection between diabetes and heart disease and visit www.diabetsawarenessproject.org