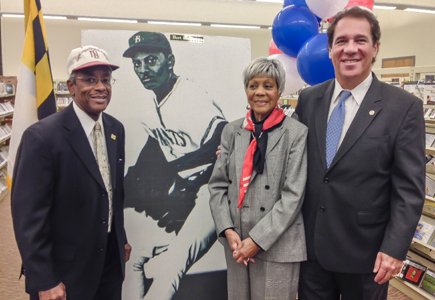 On Wednesday, November 20, 2013, Baltimore County Executive Kevin Kamenetz (right) announced that the permanent home of The Hubert V. Simmons Museum of Negro Leagues Baseball, Inc. would be located in the Owings Mills branch of the Baltimore County Public Library (BCPL). Present during the announcement was Audrey Simmons, Bert's widow, executive director of the museum and Ray Banks, a life-long friend of Simmons and the museum curator. Courtesy photo

The Museum, previously operating under the name Negro Leagues Baseball Museum of Maryland, Inc., had been housed in various temporary locations since 1996 until the County offered to give it a home in the new library. During the announcement event, Kamenetz paid tribute to the late "Bert" Simmons, who played for the legendary Baltimore Elite Giants in the 1950s.

"Baltimore County is dedicated to preserving the history of African American baseball," said Kamenetz. "We are honored to share the photographs and artifacts with the thousands of folks who will pass through these doors. The Negro Leagues Baseball legacy will live on through museums, such as we will have here in Owings Mills."

Audrey Simmons, Bert's widow and executive director of the museum and Ray Banks, a life-long friend of Simmons and Museum curator attended the event. Elected officials from the state, county and city came to show their support, as did community advocates and members of the general public. The Baltimore Orioles were represented by The Bird.

The Museum is scheduled to open in the spring of 2014— just in time for opening day.