HBCUs must adapt to teach the 21st century students

NASA's Roosevelt Johnson says it is time to believe 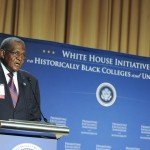 WASHINGTON (NNPA) — As historically Black colleges and universities adapt to the rapidly changing educational landscape, advocates say that collaborative partnerships in business, in the community, and on campus will be needed to ensure that HBCUs survive and thrive in the 21st century.

Johnson spoke on a panel titled, “Next Generation Partnerships: Increasing Investment in Inward and Outward Facing Research and Innovation” during the National Historically Black Colleges and Universities Week Conference held in Washington, D.C., a program hosted by the White House Initiative on Historically Black Colleges and Universities during National HBCU Week.

In a 2012 proclamation, President Barack Obama touted the role that HBCUs will play in achieving “goal of having the highest proportion of college graduates in the world by 2020.”

HBCU advocates say that will take greater investment in Black schools that have historically trailed their White counterparts in resources ranging from infrastructure to enrollment and endowment.

“We are still dealing with for the most part small liberal arts colleges and you are in competition with very large universities and university systems,” said Johnson in reference to federal and private research grant money.

In order to level the playing field, Johnson suggested that HBCUs collaborate with each other and form coalitions.

“HBCUs need to understand their own strengths but they just can’t stop there because they are competing against universities who have established relationships more resources and staff members solely focused on creating these partnerships,” said Ivory Toldson, deputy director of White House Initiative on Historically Black Colleges and Universities.

“If you’re at an HBCU, you may be teaching classes you may be performing research, participating in committees and building relationships at the same time,” said Toldson.

During a panel discussion titled, “Strengthening the Dream Through Intergenerational Leadership,” speakers addressed the need for HBCUs to form stronger relationships with the communities where they reside.