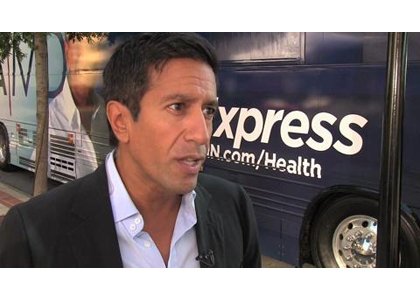 BALTIMORE — The Affordable Care Act and the circus-like controversy it has caused, has prompted a special visitor to Charm City.

“We are talking about a very historic time when it comes to health care and we know that a lot of people have a lot of questions,” Gupta said, as the bus moved out of the Blue Grass State. “We are doing a lot of on the ground reporting and learning about what is happening in the states we visit. There are a significant amount of people who don’t’ make enough money to qualify for subsidies but make too much money to qualify for Medicaid and that’s a real problem.”

“So we want to hear from people like that, how much it is going to affect their lives and the ability to pay their bills and everything else.”

The Affordable Care Act took effect on Tuesday, October 1, and immediately was followed by a government shutdown, mostly because Republicans attempted to de-fund the bill or force President Barack Obama to postpone its implementation.

It is fair to remind all Americans that many were worried that the health care system would be overwhelmed when Medicaid and Medicare began in the 1960s, but eventually the country adapted, according to Gupta.

“It’s the biggest health care reform in a very long time, so the fear is there,” he said.

Still, shutting down the government in response to the new law is akin to men acting like nine-year-old boys, Gupta said Kentucky Gov. Steve Beshear commented to him during his visit to that state on Tuesday.

However, 17 percent of Americans, or more than 48 million people, don’t have health care mostly because they can’t afford it.

“That’s what the health care community agrees on,” Gupta said. “No one should be without the ability to receive health care.”

Gupta and the CNN Express Bus plans included a visit to a call center in Baltimore where state employees would field questions from people trying to sign up for insurance.

Gupta said that he wanted to see what types of questions local residents might have.

During reports for CNN, Gupta promised to look at the national picture and provide a progress report on the week. Among the topics about the new law that Gupta says he would examine are whether there are logistical problems or surprises. His schedule in Baltimore also included a four-hour stop on Wednesday, from 6 a.m. to 10 a.m., at Harbor Place across from the Renaissance Hotel.

“We have to come up with some creative solutions,” stated Gupta, who, in addition to his work for CNN, is a member of the staff and faculty at the Emory University School of Medicine in Atlanta. He also serves as associate chief of neurosurgery at Grady Memorial Hospital and regularly performs surgery at both Emory University and Grady hospitals.

“The Affordable Care Act has a lot to digest and I’m one who has read the bill twice,” Gupta said. “Most [lawmakers] haven’t done that. But, it’s so political and people are being told it’s really good as well as the exact opposite.”