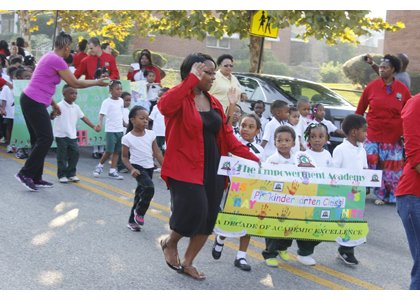 BALTIMORE — Ja’Nel Carrington Smith’s search for a charter school for her son, Jadon, proved anything but exciting.

However, that was before the Baltimore mom discovered the Empowerment Academy, a public charter school located in the Panway/Braddish community in the city, that educates children from Pre-Kindergarten to the eighth grade.

“As a parent I was looking for a private school education for my son, but with a public school fee,” Carrington Smith said. “When I came here, that was it. I knew I found the right place and my son, while he was in the first grade, took the Stanford 10 test and ranked above many others. He’s in second grade now, but took on a leadership role in the first grade and I’ve been very impressed how he has been able to tell about everything he’s learned.”

The academy celebrated 10 years of excellence with a parade on Friday, October 4, 2013.

Dolores Winston, founder of the Empowerment Academy led the parade to celebrate 10 years of excellence at the school on Friday, October 4, 2013 followed by Flag bearers Trinity C. Audrey C. and Matthew J. from the eighth grade class.

“We’ve had our share of dips in these 10 years, but they haven’t been valleys,” said Carolyn Smith, the principal at the academy. “I have to say, I expected greatness and I tell our teachers every year that we are aiming for 100 percent and our parents expect 100 percent.”

The school’s success is based on the willingness and cooperation of both parents and teachers. Parents are asked to sign a pledge that they will read with their children, be active in school activities and other functions that serve to enhance the quality of the educational experience. Teachers are asked to be available, even during off-hours. They are also asked to attend the Empowerment Academy’s church services to help promote the unity of educators, parents and students.

With 262 students, Smith says that the academy is seeking to expand by adding a class to each grade level. She said she doesn’t imagine it extending past the eight grades, “but you never know,” she said.

The school was founded in the basement of Dolores Winston. “That’s where we were for two years, in the basement figuring this out and we never doubted it would work,” Winston said.

The school focuses on literacy through the arts, all of which are incorporated throughout the curriculum. “We focus on trustworthiness, responsibilities, respect, fairness, caring and citizenship,” Winston said.

The academy also receives support from the directors of education at Goucher College.

“When Dolores Winston tells you to do something you do it,” said Phyllis Sunshine, the director of programming and education at Goucher College. “But, what we know is that consistent teaching makes a difference and the principal sets the goals at the academy and they have really good teachers. It’s not rocket science. It’s just well done.”

Most importantly, the academy and Goucher want to send a message to the community that they care about educating children. “We don’t wait for a child to get into trouble, we are proactive and we’ve made a commitment to the arts so that we can continue to educate the whole child, allow them to become well-rounded and associate well with culture,” Sunshine pointed out.