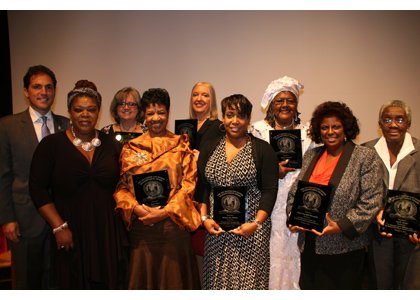 Fannie Lou. Hamer, was born on October 6, 1917 into a society in which neither women nor African Americans were permitted to exercise their right to vote. Mrs. Hamer was determined to change that. Through a fierce determination, her advocacy contributed to the passage of the historic 1965 Voting Rights Act passed by the United States Congress.

The award is given to local residents who have worked to keep the spirit of civil rights activist Fannie Lou Hamer alive through commitment to public or community service. The seven recipients of the prestigious award are:

Mary Cromwell and Gloria Threadgill were "foot soldiers" during the historic March on Washington. Lea Green worked with a statewide coalition in successfully abolishing the death penalty in the state of Maryland.

Rhonda May Winfrey established Expressions Dance company and has spent more than 20 years working with youth instilling an appreciation for the arts while developing discipline, character and self-esteem; and Revell-Dunn, a graduate of Sojourner Douglass College has worked diligently to promote adult education. Amos, who serves as a part-time legislative assistant to Speaker Michael E. Busch, was the first African American woman to manage a local bank in Anne Arundel County. Ms. Turner has spent her entire career serving as a advocate for low-income citizens in the county.

"Each of these honorees embodies the spirit of Fannie Lou Hamer. Like, Mrs. Hamer, they were determined to make a difference in their community and they have," said Carl Snowden.