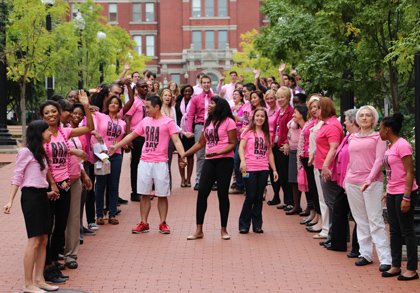 Johns Hopkins University School of Medicine and the Plastic, Reconstructive and Aesthetic Surgery Department helped to spread the word about breast cancer and the options patients have during Breast Reconstruction Awareness Day on Wednesday, October 16, 2013. Courtesy Photo

BALTIMORE — One in eight women will be diagnosed with breast cancer, and of those, 80 percent will have no idea of what options they may have for reconstructive work, according to officials at Johns Hopkins Hospital in Baltimore.

“Everyone should take notice, chances are we all know someone who has been touched by breast cancer, whether it’s a neighbor, friend, co-worker or a loved one,” said Laura Gavin, a registered nurse practitioner in the Plastic, Reconstructive and Aesthetic Surgery Department at Johns Hopkins.

The hospital’s University School of Medicine and the Plastic, Reconstructive and Aesthetic Surgery Department helped to spread the word about breast cancer and the options patients have during Breast Reconstruction Awareness Day on Wednesday, October 16, 2013, with activities promoting education, awareness and care related to post-mastectomy breast reconstruction.

“This [was] followed by a dancing and singing routine to help draw attention to BRA Day,” said spokesman John M. Lazarou.

The event marked the fourth consecutive year that the iconic dome atop the Johns Hopkins Hospital’s historic building on Broadway had been lit in pink as a reminder of breast cancer awareness month and to remind women and their loved ones about breast and health issues, according to Lazarou.

Hospital officials say breast cancer is the second-most common cause of cancer death in American women. It is estimated that this year in the United States, 233,000 women will be diagnosed with breast cancer, and approximately 40,000 will die from the disease.

If detected early, treatment can save thousands of lives. Throughout the month of October, physicians and public health officials are encouraging women who are 40 and older (under age 40 for African Americans) to speak with their doctors about breast cancer, and the benefits and risks of screening.

“Even if the mastectomy surgery was done 30 years ago, there are options,” she said. “There are even breast reconstruction options for patients having lumpectomies. In general, women need to be educated about all the options available to them.”

In a further effort to encourage all women, BRA Day included testimonies from those who have enjoyed success with the various options now available.

“I began exercising and getting healthy right away and that helped me through everything that I did,” said Pam Vierra, a mother of three from Central Pennsylvania who was diagnosed with breast cancer and decided to visit Johns Hopkins for a second opinion.

“When I was first diagnosed it was the worst nightmare, I was terrified by what I would have to go through and whether or not I would survive. I acted quickly and spoke with a local surgeon and she was thorough and compassionate but I went to Johns Hopkins for a second opinion and I decided that was the route I wanted to take.”

Vierra chose a procedure in which tissue was taken from her abdomen and transplanted to her chest to recreate breasts. “The outcome was natural and beautiful and I feel very comfortable,” she said. “It changed my life.”

While there are millions of cancer survivors, there are scores more living with cancer, some with metastatic cancer that has spread beyond its original site to other parts of the body. The hospital’s team has developed a novel retreat program for women facing metastatic disease, in which they and their spouses or partners spend a weekend discussing and learning how to cope with incurable cancer.

“If you are not being told, then feel empowered to ask. Breast reconstruction is extremely important for quality of life,” Gavin said.