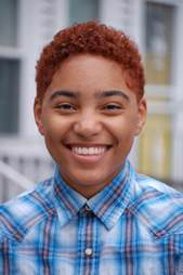 The White House honored Tiffani Cooper as a Champion of Change. Courtesy Photo

At 20-years-old, Tiffani Cooper is young, but the advice the Baltimore native has for her peers appears very mature.

“My advice to the kids in my neighborhood is, if you don’t want to be broke, stop buying Jordans (high-priced tennis shoes) and start buying education,” said Cooper, who took a trip to the White House earlier this month where she was honored as a “Champion of Change,” a presidential initiative that recognizes ordinary Americans doing extraordinary things in their communities to out-innovate, out-educate, and out-build the rest of the world.

Cooper and three other young people from around the country were invited to the White House to share and discuss their ideas. Nominated for serving as a positive role model during her strong performance in the YouthWorks summer job program in Charm City, Tiffani and other participants were selected from a nationwide pool of nominees. She served on a panel with other youth champions from San Francisco, St. Louis and Chicago. Each shared how their job experiences developed their work skills and prepared them for the future.

“We are committed to creating vitally important employment opportunities for our future workforce to help them become successful adults and responsible citizens,” said Karen Sitnick, director of the mayor’s office of employment and development. “Tiffani represents thousands of Baltimore young people who have the potential to make positive contributions to our city’s employers if given the chance.”

Cooper has been involved in the Baltimore Summer Jobs program since she was 14, says Ernest Dorsey, the assistant director of the mayor’s office of employment and development. “She has a wealth of experience and such a bubbly personality.”

“One day, I want to own my own a hotel. This has been my dream for a long time,” Cooper said. “When I began my freshman year of high school at the National Academy Foundation School in the hospitality and tourism track, I set my sights on graduating within four years and doing the best I could. Nothing in my life so far has made me feel as proud as I did at my graduation ceremony, knowing I had accomplished my goal.”

When it was announced that she ranked sixth in her class, with a grade point average of 3.1, Tiffani said it was one of those unexpected rewards— icing on the cake.

“In May, I will graduate from Baltimore City Community College with an associate's degree in general studies. Next fall, I plan to study hospitality management at Morgan State University. I am extremely fortunate to live in Baltimore City, Maryland, where there is an incredible youth summer jobs program operated by the Mayor's Office of Employment Development. The program— YouthWorks— places young people between the ages of 14 and 21 in six-week summer work experiences in a variety of industries throughout the city,” she said.

“I have been a camp counselor and I have worked for a government agency; foodservice company; hospital; and this summer, a college. I have learned how to conduct myself in the workplace— the importance of getting to work on time, communicating well with the people I work with and report to, and taking initiative.”

Dorsey says that Tiffani is only the tip of the iceberg in Baltimore. He points out that there are many young who not only dare to dream, but work hard to achieve the dream.

“Those are the ones, like Tiffani, we should be talking about in the media,” he said. “They deserve the press.”