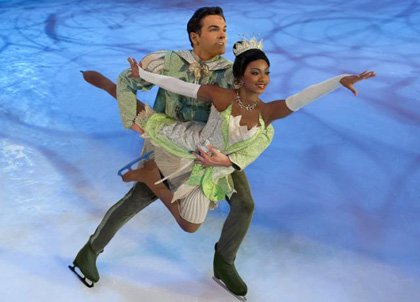 Many little girls grow up wishing that one day they could become a princess. For Soniah Spence, that wish came true. Spence portrays “Princess Tiana” in Disney On Ice presents Let’s Celebrate! The show opens at the Baltimore Arena Oct. 30, and runs through Nov. 3. Princess Tiana is one of 50 Disney characters who appear in Let’s Celebrate!, an action-packed show featuring a magical montage of celebrations and a mix of contemporary music with Disney tunes.

“Princess Tiana” is from the Disney animated movie The Princess and The Frog, which is about a princess who dreams of opening her own restaurant, but kisses a frog (“Prince Naveen”) and goes on an adventure through the New Orleans bayou. Spence, who is a native of Springfield, TN, talked about portraying “Princess Tiana.”

“I’m living out every little girl’s dream,” said Spence. “I get to play dress-up every day. My character is someone that anyone can relate to. She is a modern princess who falls in love with Prince Naveen.”

Spence, 25, attended Tennessee State University. The talented skater has been with Disney On Ice for six years.

“It's amazing,” she said. “When I auditioned, I thought I would take a year off from school and see what it was like being with the show. I enjoy performing and get to do it every day. I also get to travel all over the world. I have been to Japan, Southeast Asia, Australia, Mexico, Canada, South America, and all over the United States. At the end of this tour, we are going to Puerto Rico.”

Spence has been skating since she was 11, and both of her parents are gymnasts. Spence’s family includes 13 siblings.

“I also wanted to be a gymnast, but my mother wouldn’t let me do it,” recalled Spence. “My best friend and I did a skating class together, and I felt it was something I was naturally good at doing. I was also a dancer. I stood up on the skates. The teacher told me I was a natural and that I was good. I have been skating ever since.”

Let's Celebrate! features “Mardi Gras with Princess Tiana and Prince Naveen”; Mickey Mouse and Minnie Mouse as they celebrate a “Very Merry Unbirthday Party” with Alice and the Mad Hatter; a “Royal Valentine's Day Ball” with the Disney Princesses; and a Halloween haunt alongside Disney's most famous villains.

The show is being presented by Feld Entertainment, the worldwide leader in producing and presenting live touring family entertainment experiences.

“People can expect to see a high-energy show,” said Spence. It’s also a variety show and celebrates holidays around the world. There is something for everyone.” Spence has also performed in Disney on Ice presents Worlds of Fantasy and Disney On Ice presents Dare to Dream.

Spence encourages other skaters to dare to dream. “I didn’t expect to make it, but I did,” she said. “Everyone has something that’s unique about them. Never think anything is out of reach. Be passionate about what you do, and always go for what you want. Doors will open up.”

Tickets for Disney on Ice presents Let’s Celebrate!, are on-sale now and can be purchased at all Ticketmaster outlets and at the Baltimore Arena Box office. For tickets or information call 1-800-745-3000 or visit www.ticketmaster.com.