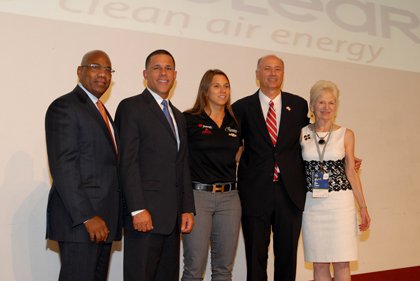 BALTIMORE — The crucial desire to keep America competitive globally and to create jobs has led government officials, celebrities, businesses and others to push for reforms in the “STEM” fields of science, technology, engineering and math.

To that end, military veterans, students and local Girl Scouts from the Baltimore and Washington, D.C., area engaged in a STEM outreach event at Morgan State University on Wednesday, August 28, 2013.

Rencheck says that he participated in the event to highlight his company’s commitment to STEM education and to raise awareness of the career opportunities available in STEM fields.

“Our clean energy present and future depend on a robust, talented pool of highly skilled engineers, technicians and craft labor,” Rencheck said. “It’s important to spark the interest of students and raise awareness among military veterans of career opportunities in the energy industry and the importance of nuclear energy’s contribution to clean electricity,” he said.

Despite spending nearly $3 billion annually on STEM education, America ranks 25th in math and 17th in science when compared to other countries on international assessments. A 2012 report from the Government Accountability Office found that 83 percent of federally funded STEM education efforts had duplicative elements.

Most of those programs aren't coordinated and aren't accountable for results, officials said. They are more responsive to individual members of Congress than actual needs in the classroom or the economy.

“Morgan is proud to partner with AREVA and its continuing efforts to spur interest and opportunity in STEM careers to the nation's brightest young minds. We share a common interest and goal in delivering innovation and diversity to a global marketplace, with an eye towards sustainable energy and its long-term benefits,” said Wilson, the 12th president of Morgan State University, who has a long record of accomplishment and more than 30 years of experience in higher education administration.

Wilson’s educational philosophy is to put the students’ experience first.

Officials said he is a consensus builder and a strong believer in transparency of process. His goal is to make Morgan a leader in producing the next wave of innovators in the U.S. “I’ve always tried to create an atmosphere where I work so people don’t see what they do as a job,” he says. “It’s a calling.”

Further, Wilson said, "We appreciate AREVA's dedication of resources and manpower to the nation's energy objectives, and are excited about Morgan's role in producing those who will serve as the industry's next generation of leaders and advocates of the same."

Local students and members of the Girl Scouts of Greater Maryland also participated in activities that focused on the anatomy of an atom, and energy and engineering.

Military veterans attended a special panel discussion on careers in clean energy, which featured representatives from AREVA and its Transnuclear business unit, as well as Exelon and PPL. They also had the opportunity to speak with AREVA talent recruiters and learn about job opportunities available in engineering, project management and outage services.

“Last year AREVA and its employees contributed nearly $80,000 and more than 900 volunteer hours to support interest in STEM at the middle and high school, and university levels,” Rencheck said.

“Our goal is to help bridge the gap between demand and availability of STEM talent, and cultivate tomorrow’s STEM-related workforce.”