HBCU Football is back 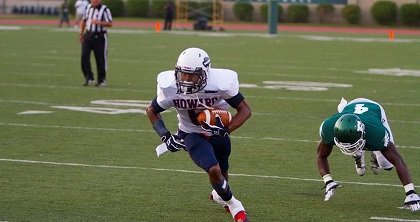 The 2013-14 Football seasons are here and there were some GREAT games that started the season:

Florida A&M: The biggest news weekend was not just the return of football at FAMU but the return of the Marching 100 as well! The band was reinstated after a 22-month ban for an hazing incident that caused the death of a band member. The Marching 100 and the game were televised LIVE on ESPN. Neither the band nor the team disappointed as Florida A&M beat Mississippi State Valley. Damien Fleming, Omari Albert and Al-Terek McBurse ran for touchdowns, as Florida A&M beat Mississippi Valley State 27-10 on Saturday in the SWAC/MEAC challenge.

Morgan State Bears: The team opened the season with a disappointing loss to Army, 28-12. The Bears had no answer for Army’s quarterback, Angel Santiago, who took advantage of Morgan State’s mistakes, penalties, poor tackles and turnovers. Unlike professional football, where there are pre-season games for players to prepare themselves for the games that count— college football has no such games. Hopefully, this game will not be an omen for the rest of Morgan State’s season. Considering sources have Coach Donald Hill-Eley on the hot seat if his team does not win this year. Army’s quarterback, Angel Santiago ran for two touchdowns and threw for another in the win. Morgan’s quarterback Robert Council scored on a one-yard run and hit wide-receiver Chris Flowers with a 22-yard touch down but they came up short.

Howard Bison: This game turned into a shootout as Howard jumped out to an 11-point lead over Eastern Michigan. The Eagle’s Bronson Hill scored a touchdown with a minute to go in the third quarter. Hill ran for another touchdown three minutes into the fourth after an interception by Sean Kurtz set up the Eagles at the Howard 15 yard line, giving Eastern Michigan a 27-24 lead. A touchdown by Darius Jackson capped off the scoring streak. Howard’s Greg McGhee threw for one touchdown and rushed for another. McGhee finished with 160 yards passing and 93 yards rushing. William Parker had 82 yards rushing and the other Bison touchdown. Howard lost the game 34-24.