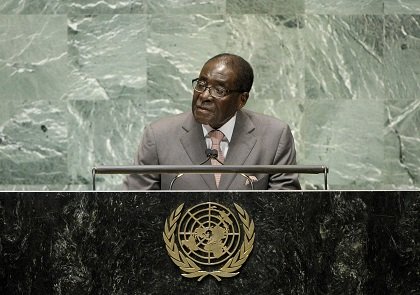 Robert G. Mugabe, President of the Republic of Zimbabwe, addresses a high-level meeting of the General Assembly on the prevention and control of non-communicable diseases. UN Photo/Marco Castro

HARARE, Zimbabwe (CNN) — Zimbabwe President Robert Mugabe swore in his new government Wednesday and confirmed that the new 26-member Cabinet, mainly composed of allies from his previous appointments, will not abandon his controversial policy of seizing the majority stake of foreign-owned firms.

The 89-year-old leader told journalists after the Cabinet's installation that Zimbabwe's economic recovery will be anchored on mining, manufacturing and agriculture industries.

Zimbabwe had had no functioning Cabinet since the July 31 elections when Mugabe was re-elected. Between 2009 and this year, Mugabe's Zanu PF party and former Prime Minister Morgan Tsvangirai's MDC party shared power.

The new Cabinet retains the Ministry of Indigenization, the policy of seizing the majority stake of foreign owned firms and giving them to black Zimbabweans. Critics of the policy have said it mainly benefits a few elites.

On Wednesday, Mugabe said most African countries like Sudan and Gabon are lagging behind as "whites" exploit the continent's resources.

"That is exploitation. That is theft by using crook-ish means to steal the wealth of Africa. Ah. Lets reject that," said Africa's oldest leader, who will finish his new term when he is 94 and will be able to stand for another term

The Cabinet also includes Jonathan Moyo as media, information and broadcasting services minister. He was the one who drafted tough media laws in 2002 that have resulted in the deportation of foreign journalists and the closing of some media organizations.

Mugabe tossed him out of Zanu PF after Moyo stood as an independent in the 2008 elections.

Former Justice Minister Patrick Chinamasa is now the finance minister, taking over from Tendai Biti, who was from the MDC party under the 2009-2013 coalition government.

On Wednesday, the opposition described the Cabinet as "dead wood."

Mugabe and Zanu PF got more than a two-thirds majority in parliament in the July 31 elections.