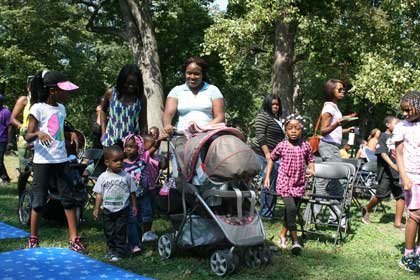 BALTIMORE — “Walkers, take your mark, get ready, get set and push your strollers!” An exciting, fun event will give families an opportunity to do just that. On Saturday September 21, 2013, from noon to 4 p.m. Baltimore Healthy Start, Inc., the U.S. Office of Minority Health (OMH), and state and local health officials will hold the “Second Annual Baby Buggy Walk in the Park,” a one-mile walk, which promotes health and fitness.

The event will be held in Druid Hill Park near the Sundial Pavilion/Grove. Event participants include author and activist, Tonya Lewis Lee, the wife of filmmaker Spike Lee, who will discuss the OMH’s “A Healthy Baby Begins with You” campaign and 92Q on-air radio personality Sonjay DeCaires, who will be the celebrity Mistress of Ceremony.

Families with their baby buggies will walk along the 1.5 mile course around Druid Lake Reservoir to music and will also have a chance to sign up for “text4baby” and be entered in a contest to win a year's worth of baby products courtesy of Johnson &Johnson.

“Text4baby” is a free health text messaging service for pregnant women and mothers with infants under age one.

“This event is part of our efforts to be a part of the battle to reduce obesity,” said Alma Roberts, president and CEO of Baltimore Healthy Start, Inc. “The more obese a woman is, the more at-risk she is for poor birth outcomes, and for jeopardizing her own life.”

“We have such pressing priorities in our lives, that sometimes families don’t get the proper nutrition and exercise,” said Roberts. “That’s all a part of this initiative. This is a fun event, and the walk is achievable. This event helps to create a path to fitness and wellness.”

While the infant mortality rate is generally declining across the nation and in Maryland, it remains high in Baltimore, especially among African American residents. According to Baltimore Healthy Start, obesity is increasingly recognized as a major contributor.

According to the Centers for Disease Control and Prevention (CDC), obesity accounts for 18 percent of deaths in this country. In 2012, black infants in Baltimore had a rate of 12.6 deaths per 1,000 live births— three times higher than white babies born in the city, according to Baltimore Healthy Start.

by African American women in Maryland is among the highest in the nation (63 percent according to Baltimore City, Baltimore County, Maryland Obesity Rates & Fast Food Consumption by County 2008).

“Obesity is also linked to heart disease, hypertension, diabetes, and many other diseases,” said Roberts. “That doesn’t include knee and hip replacements, which in many cases are caused by obesity. This event is a festival, but it also seeks to spread a fitness and nutrition message.”

The Baby Buggy event will also feature healthy meal demonstrations by local chefs and nutrition experts, health information and screenings, vendors, and activities for children including a moon bounce.

The event started last year in Baltimore, and has since grown to include 20 other U.S. cities, which will also be holding their own Baby Buggy events.

“We are very proud of the fact that this event is now nationwide,” said Roberts. “Locally, we are hoping to get 300 to 400 participants. Buses will also be all over the city transporting people to and from the event free of charge.”

She added, “We can say this event was a success when at least 100 people would have walked, finished, and said, ‘I didn’t think I could do it.’ We are going to encourage them to continue to do what they have started by walking steps and doing other fitness exercises.”