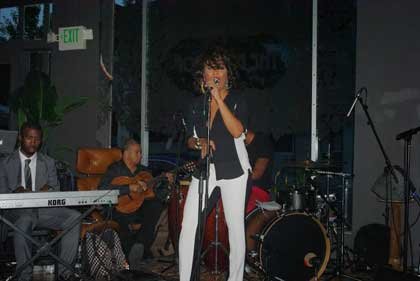 BALTIMORE — It may be quite possible to say that Baltimore may never be the same. This past Sunday, September 8, 2013, Baltimore's own Carmelita Cimone took to the stage and musically influenced all who turned out for her acoustic monologue, “The Original Me.”

The evening was a display of quality music, love and community. From the beginning of the show until the end, the crowd was captivated by Cimone's sultry sounds as she took her audience, song by song, through some of her most intense early career experiences. She shared the highs and lows of her journey and prepared the audience for her newest project, “Introducing Carmelita Cimone.”

The event took place at The Bun, a local Mount Vernon bakery and café. It was the perfect venue for Carmelita Cimone and the essence of her music. At times it felt like Cimone was singing in a living room full of family, yet her melodic style invoked a star quality and that made it clear that she should be heard by millions.

Carmelita Cimone moved the crowd and sang tracks that were written well before her time. Accompanied by background singers, who included her classically trained mother, Paula Scott, she had the crowd of supporters feeling every note.

Her performances included, Chaka Khan's “Sweet Thang,” as well as sounds from The Stylistics, Mary J. Blige, Brandy, Faith Evans, 702, Destiny's Child and newer hits such as “Party” by Beyonce.

Carmelita Cimone provided her audience with a distinct synopsis of earlier times in her career when she worked with the likes of icons such as Puff Daddy and Jay Z. Her array of tracks detailed the struggle and the beauty of pursuing your dreams. Throughout her entire set, she reassured her listeners that success is attainable. At the opening of her show, Carmelita, performed Cee Lo Green's song, “Crazy”; dedicating the evening to every person who was passionate enough to chase their dreams.

The show featured live music from opening artists including Jared a young artist from Baltimore and Freedom Imani, from Los Angeles. DJ Lil Mic and host Barnesz/BZ also performed during the show. Later in the evening Carmelita shared the stage with her former girl group, Cache' bringing the night full circle. Baltimore should be proud to claim Carmelita Cimone as one of its very own. She brings a fresh new look to the soul and talent of emerging artists here in the city.

Baltimore needs more of Carmelita Cimone's organic, soulful and graceful style. As one of the city's budding songbirds, she is an artist to watch.