Lionel Richie: Keep your clothes on until you have a hit 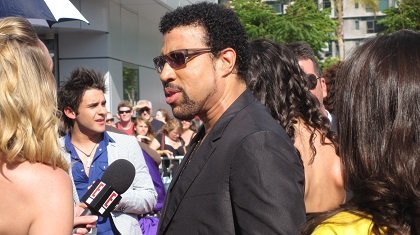 CNN — Lionel Richie is back and ready to hit the stage.

The crooner is gearing up for his "All The Hits All Night Long" North American tour, which kicks off Wednesday in Hollywood, Florida. CNN caught up with Richie at Paramount Studios in Los Angeles during the singer's final rehearsals for the 19-date tour. It's there the music legend advised fans not to be fooled by the tour's name.

"If they're waiting for all night long, let me tell you, I gave that up a long time ago," Richie told CNN. "I always used to say to them, all night long went all night long when 'All Night Long' was out. Now it's down to a fierce 30 minutes, but if you want anything after that, I can pretty much guarantee an hour-45 to two hours solid."

Richie promises the tour will be a mix of classic hits and fan favorites, ranging from his Commodores days to his 2012 release, "Tuskeegee." To keep fans on their toes, the hit maker has a list of 14 songs to choose from each night. Richie compares planning out his shows to coaching a professional sports game.

"It's like going to a football game and you know the plays," he said. "So when I call out a different play, they'll go to it."

Richie's last album found him recreating his biggest hits as collaborations with some of country music's top names. Who does he want to jump on stage with him during this tour? The list is extensive.

"Bruno Mars. Come on Bruno, where are you? Sting. I could do Kenny Chesney any day of the week. Tim McGraw. I'm sure these guys were in the Commodores at some time. I just have to go back to see if their pictures were there, because they're so familiar. The beautiful part about it is that the one thing they say to me when they meet me is, 'I know every song.'"

With Mars confirmed to perform at the 2014 Super Bowl halftime show, Richie has no doubts the 27-year-old will do a great job.

"My boy is going to kill it. Are you kidding?" Richie said. "Listen, Bruno is the real deal. And what I love about him the most is that he's a songwriter. He'll take care of business. I'm not worried."

As a music industry veteran, Richie has some sage advice for those up-and-comers who resort to shock tactics when hitting the stage.

"I've always said this -- this is my little anecdote -- but once you start taking off your clothes, that means you've got to have a hit record," he said. "You've got to back it up with something. My philosophy is -- I'm the other way around. Give me the hit record first and you don't have to take off your clothes. Taking off the clothes means, 'I need that hit record.'"

The "Hello" singer admits he's still surprised to see younger fans in the crowds at his concerts.

"The greatest thrill of this to me is what started out to be just, 'Can we meet some girls on campus at the university?' ended up being a career, and the songs still work. The music's been around long enough where the next generation is taking possession of it."