Cicely Tyson shines in 'The Trip to Bountiful' 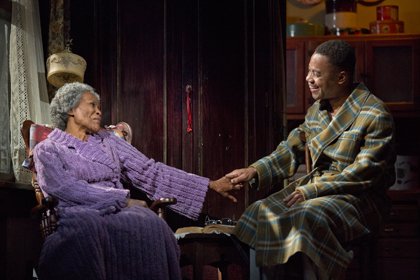 Carrie Watts, played by Cicely Tyson, is restless and wants nothing more than to return to her abandoned home in a Texas town called Bountiful. Her son, Judi, played by Cuba Gooding, Jr. also pines to return to his childhood home. Joan Marcus

“The Trip to Bountiful” is like nothing you have seen on Broadway. And yet, like all good art, it is not entirely new. The Broadway musical featuring Cicely Tyson, Cuba Gooding Jr., and Vanessa Williams is a revival of Horton Foote's 1953 timeless stage play of the same name. 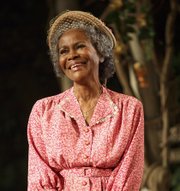 In the play, Tyson, 88, plays Carrie Watts, a beleaguered mother-in-law who can think of nothing else but a return to her abandoned home in a small Texas town called Bountiful. She lives in a cramped Houston apartment with her son, Ludie, who secretly pines for his childhood in Bountiful, and his nagging, narcissistic, and city-loving wife Jessie Mae, played by Vanessa Williams.

Originally written for a white cast, retelling the story from the perspective of an African American family in the Jim Crow South required a nuanced approach, with linguistic changes and distinct set choices, such as a segregated Greyhound bus station. But with the guidance of Horton’s daughter, director Michael Wilson has pulled off the changes flawlessly, while retaining the essence of Horton's brilliant script.

Tyson’s performance is joyous, earnest, and audacious throughout, from a bold escape from Houston, to befriending a young woman named Thelma (played by Adepero Oduye) on her journey.

The set and costume design, by Jeff Cowie and Van Broughton Ramsey respectively, transport the audience to the 1950s. In one act, Carrie Watts and Thelma travel in a suspended bus carriage that seems to move towards the audience, magically bringing the stage alive.

As Ludie and Jessie Mae, Cuba Gooding Gooding Jr. and Williams, both relatively inexperienced on the Broadway stage, can hardly match Tyson, whose thirty-year reprieve from the stage has not diminished her light, only intensified it.

Tyson is endlessly youthful in her role. When she reminisces and dances up a storm you feel, as she does, as if you were 21 again. When she lights up the stage with hymns like “Blessed Assurance,” she is infectious. The audience can’t help but sing along, and for that moment the theater is converted into a southern church. When discouraged from going to Bountiful, she pledges that she will be a new person once she finishes the journey. “I just have to see it with my own eyes,” she says.

Artistically, Williams manages to hold her ground with a feisty and convincing portrayal of a compassionless woman obsessed with dresses, movies, Coca-Cola, and a house without hymns. The perfect foil for her mother-in-law, “she loves the city, she loves the escape [and] to be plugged into the pop culture, rather than to focus on the past,” says Williams.

The tension between the two characters “allows the viewer and the audience to resonate what is their bountiful is,” says Williams. “What is the past and what is it they miss and want to recreate?”

As subtle commentaries on American culture from Horton’s version are revisited, the simple and powerful story takes the audience on a metaphorical return to their roots. We believe this struggling family could be ours, and at the end, are brought to our feet.