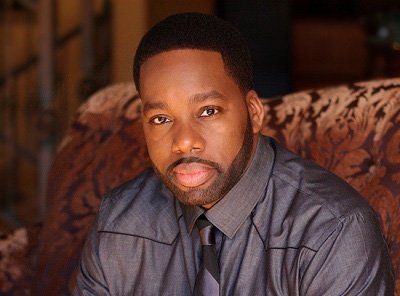 To celebrate the release of his second major film, “Baggage Claim,” Talbert hosted a special screening for the students at his Alma Mater, Morgan State University on Monday, September 16, 2013 at the AMC Theatre in White Marsh, Maryland.

“Baggage Claim” is based on Talbert’s book by the same name. It’s story about “Montana Moore” a flight attendant played by actress Paula Patton, who finds herself with only has 30 days to find “Mr. Right.” With the help of her friends, she uses the travel privileges she receives through her job to find the perfect mate.

Talbert says that his inspiration often comes from listening in on others.

“I get most of my ideas through eavesdropping on some of my wife’s conversation with her girlfriends,” he confided. “I’ll sit in the other room and just listen to different scenarios her girlfriends are going through, and then gather that information with other real life situations [that] some women may encounter and create a concept from there.”

After the screening of the film, Talbert answered question from students who were eager for career advice about the film industry.

He told the students that dreams can come true with hard work. “I believe the journey to success is however you get there— you just get there. Whatever one aspires to accomplish in life, approach it like it’s a house and whatever you have to do to get inside that house, whether it’s through a window, door or crack in the wall— get in there! Accomplishing your dreams is very possible and when you get there, just remember to leave a crack for someone else to get in,” he said.