“The Trip to Bountiful’ — The Interview

Home can mean many things. It has a particular definition for every person. But the essence of it for everyone, according to Vanessa Williams, is love.

With this central archetype, the Broadway revival of “The Trip to Bountiful” by Horton Foote has been an unexpectedly intense creative journey for its seasoned actors.

Williams plays the role of Jessie Mae Watts, a city girl obsessed with fashion magazines and Coca-Cola. She portrays a cold and calculating daughter-in-law, insensitive to Carrie Watts— played by Cicely Tyson— who longs to return to her rural hometown.

“It took a while for me to lose myself enough in the character to feel comfortable in the way that Jessie Mae has to treat the mother,” Williams admits.

Williams says the conflict between Jessie Mae and Mrs. Watts should be interpreted against the backdrop of the historical phenomenon of African American migration, which transformed so many families and splintered communities. 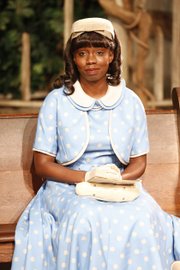 Adeperu Oduye, the 35-year old, Brooklyn-born actress who plays Thelma, a girl who befriends Mrs. Watts, has her own complex connection to the themes of home, migration, and belonging.

“Being Nigerian and growing up in New York, where you feel at home is a very complex personal thing,” says Oduye. The actress likens Tyson’s deep longing for home to the homesickness often experienced by her immigrant parents.’

“It seems very simple but it’s complex because she just can’t go back by herself,” says Oduye. “The choices that we make to make a better life…[are] for the people we love.”

Through all the challenging themes and character work, the stars of the show bask in Tyson’s performance. In interviews, they glow about it.

“This is a great opportunity to work with a legend,” says Williams. “To be in a Broadway show… [and] at her age to do this material is pretty historic.”

Known for bigger, dramatic and more serious roles, Tyson surprised the cast with her mastery of comedy. “It is sentimental but she infuses it with so much humor. She is the epitome of great acting,” said Williams. “We have to have her kiss her hand; we are all so thankful of her gifts and presence.”

“The Trip to Bountiful” has been extended and will run at the Stephen Sondheim Theatre until October 9, 2013.