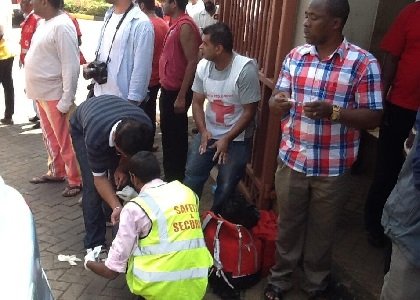 Hostages who were released from the Westgate Mall shooting and standoff in Nairobi, Kenya on September 21, 2013 are treated for injuries. Kenya Red Cross

CNN — The weekend massacre at an upscale shopping center in Kenya is shining a new light on an old concern for Western counterterrorism officials: the recruitment of jihadist fighters from among the Somali diaspora.

It's a concern all too familiar for many Somali-American families in Minneapolis, Minnesota, where young men have been slipping away to join the al Qaeda-affiliated guerrilla group Al-Shabaab for the past few years, sometimes in groups. Several have died, their relatives learning of their deaths in cryptic phone calls or in messages posted online.

One of those killed was Burhan Hassan, who was killed fighting in Somalia. His uncle, Abdirizak Bihi, told CNN that members of the city's Somali community have been trying to counteract the recruitment efforts.

"What we have learned for the last five years is we have to speak out against this," Bihi said.

In a message on its now-suspended Twitter page, Al-Shabaab named nine people it said were among the gunmen who stormed Nairobi's Westgate Mall on Saturday. Three of them were from the United States and one each was from Canada, Finland and the United Kingdom, it said.

"It isn't totally surprising, given the fact that we know Shabaab has recruited in the United States," CNN terrorism analyst Peter Bergen said Sunday. "We also know they have recruited in a number of European countries."

Bergen noted that the group's Twitter page includes tweets in colloquial English -- "the kind of English that an American, or perhaps somebody who grew up in the UK, would be using."

Al-Shabaab is fighting to implement a stricter form of Islamic law in Somalia -- a struggle in which Kenyan troops have been directly involved since 2011. Kenyan troops wrested control of the key Somali port of Kismayo from the jihadists in 2012, and Somali government and African Union troops drove the group out of its strongholds in the capital Mogadishu in 2011.

As early as 2008, the FBI warned that more than a dozen youths -- some of them American citizens -- had left Minneapolis, home to a large population of Somali immigrants. At least three are believed to have carried out suicide bombings in Somalia, where an internationally backed interim government has taken tenuous root after two decades of civil war and near-anarchy.

Minneapolis is home to the largest Somali population in the United States, and Bihi said the community "is 100% against terror." But he said a lot of families arrive owing "a lot of debt," and community youth programs were "almost nil." Al-Shabaab recruiters engaged teens by providing them entertainment and role models, then "brainwashed" them, he said.

A senior State Department official told CNN that U.S. officials are trying to confirm whether the names released by Al-Shabaab are Americans, but said they are becoming more confident American citizens were involved in the Kenyan attack. The official said the administration has been concerned and raising alarm bells about Al-Shabaab recruitment in the Somali-American community for years, and would be making decisions will be made in coming days about additional efforts to stem the flow of recruits.

In 2010, a federal grand jury charged 14 people in the United States with aiding Al-Shabaab. Two women in Rochester, Minnesota, were convicted of soliciting more than $8,000 for the group under false pretenses, telling contributors the money was for the poor, and received 10- and 20-year prison terms.

The rest of those named in the indictment had already gone overseas, including Omar Al-Hammami -- who became something of a jihadist rock star before falling out with the group and dying in a fratricidal ambush in 2012.

Hammami differed from many of the other recruits. He was raised a Baptist in Alabama, but converted to Islam as a young man and created rap-style recruiting videos that bridged American and Somali culture.

Another man, Mohamed Ibrahim Ahmed, was sentenced to more than nine years in March after pleading guilty to aiding Al-Shabaab. Ahmed was a native of Eritrea who had been living in Sweden before joining Al-Shabaab, prosecutors said. He was arrested in Nigeria and transferred to New York for prosecution.