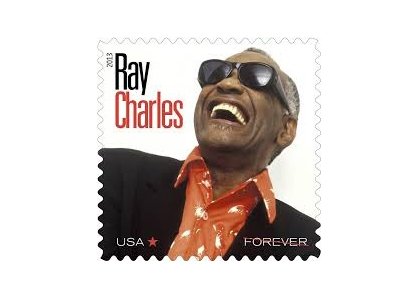 With apologies to Chuck D, many African-American heroes are now appearing on United States Postal Stamps.

The USPS continues to honor African-American legends and momentous events in black history, including the release last month of a civil rights stamp, which followed those of Rosa Parks, tennis legend, Althea Gibson; and others.

The honors arrive more than 20 years after Chuck D, the legendary leader of the rap group, Public Enemy, famously remarked about black icons, “Most of my heroes don’t appear on (a) stamp.” Last year, Public Enemy and Chuck D, whose real name is Carlton Douglas Ridenhour released a new CD, titled, “Most of My Heroes Still Don’t Appear on [a] Stamp.”

“No matter how many awards and accolades he received, Ray Charles was genuinely humbled by each and every honor. To him, it meant people anticipated what he loved doing so much, his music,” said Valerie Ervin, president of the Ray Charles Foundation in Los Angeles.

For the new stamp, art director Ethel Kessler chose a photograph of Charles taken by Yves Carrère late in the great singer’s career. Designed to evoke the appearance of a vintage 45-rpm record sleeve, the stamp sheet contains two sides that include the stamps and the image of a record appearing to peek out of the top of the sleeve.

“We are very pleased to announce that the third stamp in the new, ‘Music Icons,’ series will celebrate the life and music of Ray Charles,” Postal officials said in statement. “This extraordinary composer, singer and pianist, blind since childhood, went beyond category, blending blues, gospel, country, jazz and soul music in a unique and highly influential pop music style.”

Earlier this year, the postal service revealed plans for a new stamp collection called, “Music Icons.” The series shines the spotlight on three American originals, the late Lydia Mendoza, a pioneer of Tejano music; Johnny Cash, the country music superstar known as “The Man in Black”; and Ray Charles, the musical trailblazer who many musicians, including superstar Stevie Wonder, consider an idol.

Released on what would have been the singer’s 83rd birthday— Monday, September 23, 2013, the stamp coincides with a new, “Ray Charles Forever,” two-disc CD/DVD. The 12-song set features Charles’ performances of classic hits like, “America the Beautiful,” “They Can’t Take That Away From Me,” and “Imagine.” The disc also includes mega-hits like, “Georgia on My Mind,” “Hit the Road Jack,” “What’d I Say,” and “I’ve Got a Woman.”