'White is beautiful:' Why India needs its own Oprah Winfrey 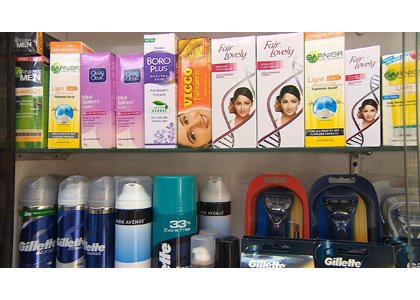 Many Indians feel the disturbing obsession with fairness in their country is compounded by Westernization. CNN's Piers Morgan Live

NEW DELHI, India (CNN) — Tanupriya Khurana watches intently as her sister Bhavna gets a makeover at a designer cosmetics kiosk in the middle of one of Delhi's most popular malls, Select Citywalk.

Shades of velvety pink blush roll over Bhavna's olive cheeks. She holds up a mirror and inspects the results.

Behind the kiosk, a clothing and lingerie store displays trendy fashions on mannequins with blond hair, blue eyes and milky white complexions. They look nothing like Tanupriya and her sister or the hundreds of other Indians milling about this upscale shopping complex on a Sunday afternoon.

Even the advertisements and store posters that use Indian faces promote a look that is unattainable for most Indians: long, silky straight hair; a tall, thin body; and, most importantly, a fair complexion. The most popular Bollywood stars such as Aishwarya Rai -- a former Miss World -- look more white than Indian.

"Being white is the preference," says Tanupriya, 23, an insurance brokerage firm employee. "There's a different psychology here. I think Indian women have problems with acceptance."

Khurana says this tongue in cheek. She knows it's racist -- and disagrees with this collective thinking. But she's right. As far back as I can remember, a woman's complexion has been a very big deal in my native land.

When I was a child, my aunt forbade me to play outside lest I turn several shades darker in the sun. The same aunt lamented after one of my trips to Iraq that the strong sun had made me "black."

Many Indians feel their country's disturbing obsession with fairness has been compounded in recent years with the invasion of European and American retail outlets and widespread access to information via the Internet.

The discussion was reignited after Nina Davaluri, a woman of Indian descent, was crowned Miss America. Many here wondered: Could someone as dark complexioned as Davaluri win a pageant in the country of her heritage?

Pratima Singh, the kiosk employee doing the makeover on Tanupriya's sister, says she often has clients who choose foundation or powder that is too light for them.

"They say they want to look like her," Singh says pointing to a giant clothing ad featuring a white woman. "But you can't camouflage what you are."

Khurana agrees. "That's the saddest thing in our country," she says as her sister's face is transformed into Bollywood glamor. "Looks, color of skin -- we should ignore such things."

Should, yes. But even those here who do not dispute the new Miss America's beauty said this: A pageant or a Bollywood role is one thing, but when it comes down to finding a bride for a beloved son, Davaluri, despite her stunning looks, would be too dark to make the cut.

Sure enough, matrimonial ads in India -- arranged marriages are still the way many young people choose to wed -- often read like this: