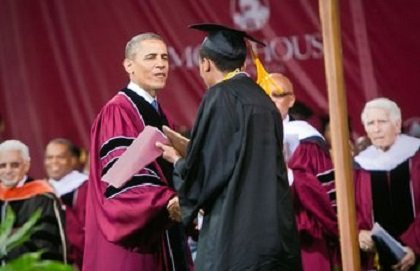 The news is not good for young people with a four-year degree: roughly 284,000 college grads are working minimum wage jobs, according to the U.S. Department of Labor. The Chronicle of Higher Education reports, “317,000 waiters and waitresses have college degrees (over 8,000 of them have doctoral or professional degrees), along with over 80,000 bartenders, and over 18,000 parking lot attendants.”

The Associated Press published an article stating, “young adults with bachelor's degrees are increasingly scraping by in lower-wage jobs— retail sales clerk, security officer or receptionist, and that's confounding their hopes a degree would pay off despite higher tuition and mounting student loans.”

These stories with their attention gathering headlines, buttressed by dismal government statistics are sending a clear message that a college degree is no longer a ticket to the middle class. But does all this academic gloom and doom mean poor and minority students should abandon their pursuit of a college education? The answer is resounding no!

To support this advice I offer three reasons why young black men and women should work even harder to earn at least a bachelor’s degree. First, at the risk of sounding like a conspiracy theorist, I suspect many of these reports are written to reduce the pool of college graduates by discouraging minority populations from pursuing higher education.

Why? In the minds of some, a college education has lost much of its exclusivity and prestige. For nearly 90 percent of our country’s history, a college education was solely the domain of upper class white males. Until the civil rights movement black attendance at state colleges was limited to one or two students per semester, and virtually barred from private white universities.

However once the doors to higher education were opened a new generation of black students, were able to successfully compete for merit-based scholarships at public and private schools. Many others qualified for financial aid, which allowed them to attend more affordable state colleges. In the span of 50 years a college degree has become a more democratic achievement.

Secondly, the news reports never say what types of degrees these college-educated waiters and parking lot attendants have earned. Every young black person that I know with a STEM (science, technology, engineering and math) degree is gainfully employed in their chosen profession.

It would not be surprising if a good portion of underemployed/unemployed college grads earned degrees in less demanding majors. This is partly the fault of college administrators who sought to boost enrollment by offering “student-designed” majors. The College Board's Annual Survey of Colleges reports the number of schools offering university-created interdisciplinary degrees has increased by 42 percent in recent years.

I admire the creativity of fashioning a unique course of study. Yet, as the parent of current college student, I’d steer my son away from a hybrid undergraduate major. I feel it’s doubtful there’s much demand for a 22-year-old with a degree in a subject like Comparative Mythology.

My third and final point is based upon the thoughts of Ben Casselman, a writer for the Wall Street Journal “Better-educated workers still face far better job prospects than their less-educated counterparts, says Casselman. “The unemployment rate for Americans with at least a bachelor's degree was 3.8 percent in February, compared with 7.9 percent for those with just a high school diploma.

He offers another compelling reason poor and minority students should seek a degree. “College-educated employees also tend to earn more and advance more quickly even when they are in fields that don't require a degree. But as college-educated workers have been forced to take lower-level jobs, they have displaced less-skilled workers, leaving those without degrees with few job options.”

In the words of Public Enemy: “Don’t believe the hype.” A college degree is still one of the best investments a young black person can make. When the economy improves, who do you think will be at the front of the line for the best paying jobs? All those college educated waiters and sales clerks. My advice to secure your highest place in the work world is to do whatever is necessary to earn your degree.

Jayne Matthews Hopson is development officer for the Waldorf School of Baltimore. She believes education matters because “only the educated are free.”