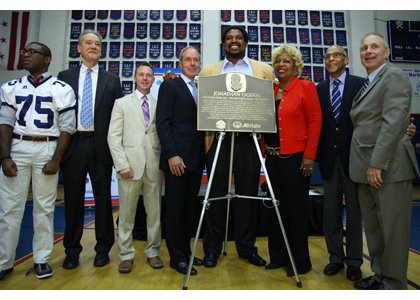 Professional football legend and former Baltimore Raven Jonathan Ogden was recognized by the Pro Football Hall of Fame and Allstate Insurance Company in Washington, D.C., on Friday, September 20, 2013 as part of “Hometown Hall of Famers™,” a national program honoring the hometown roots of the sport’s greatest coaches, players, and contributors with special ceremonies and plaque dedication events in local communities.

An 11-time Pro Bowler and former high school standout at St. Albans School, Ogden was presented with his “Hometown Hall of Famer™” plaque during a special ceremony in the school’s gymnasium, where the plaque will live permanently to serve as an inspiration for the school’s students and athletes. The presentation will be made by Ogden’s former athletic director from St. Albans School, Oliver ‘Skip” Grant.

“To be part of a program that brings the prestige and tradition of the Pro Football Hall of Fame to communities like Washington, D.C., is an honor for Allstate, our agents and employees,” said Lisa Cochrane, Allstate’s senior vice president of marketing.

In addition to the plaque, a commemorative Jonathan Ogden “Hometown Hall of Famers™” road sign will be on display in Washington, D.C.

An Outland Trophy Award-winning tackle from UCLA, Ogden was the first-ever first-round draft pick of the Baltimore Ravens in the 1996 NFL Draft. The consensus All-Rookie pick helped the Ravens climb to the top of the NFL during his 12 seasons in Baltimore. A great pass protector and run blocker, Ogden helped lead the Ravens to their first-ever Super Bowl in 2000 where they beat the New York Giants in a 34-7 victory in Super Bowl XXXV.

The NFL Alumni named Ogden the NFL’s Offensive Lineman of the Year in 2002. He received first-team All-Pro honors six times and All-AFC honors nine times, and was a member of the NFL’s All-Decade Team of the 2000s. Ogden was inducted into the Baltimore Ravens Ring of Honor in 2008 and the College Football Hall of Fame in 2012.

In 2013, Ogden became the first longtime member of the Ravens franchise to be inducted into the Pro Football Hall of Fame.

Fans can visit the Pro Football Hall of Fame website for more information about the “Hometown Hall of Famers™” program, and can view event videos at www.youtube.com/allstate.