The rise of Michael Strahan

Strahan has gone from pro athlete to media darling 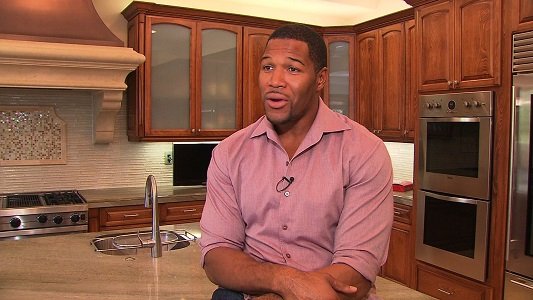 CNN — Michael Strahan loves the mega-romantic film "The Notebook," isn't afraid to admit his fear of snakes, supports same-sex marriage and makes Kelly Ripa giggle like no one else.

Is it any wonder he's a media darling?

The former NFL star is a rising star of another sort these days with gigs as co-host on the popular morning show "Live with Kelly and Michael," as a sports commentator and now reports that he may be joining "Good Morning America."

It's an interesting trajectory for the 6-foot-5-inch, gap-toothed Strahan, who spent his entire professional athletic career playing for the New York Giants and proudly sports a Super Bowl championship ring.

Strahan grew up in Germany, the son of a military man, and briefly played high school football after his family sent him to the States to live with relatives. After playing for Texas Southern University, he was drafted by the New York Giants, where he played from the 1993 to 2007 season.

He enjoyed a 15-year career in the NFL and after retiring in 2008, Strahan followed the route of many former athletes by venturing into sports commentary and signing on as an analyst with Fox Sports in 2008. He also ventured into the world of acting with commercials for various entities including Vaseline, Subway and with the very short-lived Fox sitcom "Brothers," which premiered in 2009.

But it was multiple appearances guest-hosting on the then "Live with Regis and Kelly" morning show that helped him secure a spot as co-host in 2012 after Regis Philbin retired. The pair have become favorites among fans with their easygoing chemistry and obvious adoration for each other.

"He really gets it," Ripa told Katie Couric in an interview in 2012 after Strahan was selected following a massive search for her new co-host. "He gets what we're about."

"It's how it is all the time," Strahan said of his relationship with Ripa, whom he calls his work wife. "What you see on camera is what you get behind the scenes."

The former jock has also scored in his personal life. After two previous marriages, the second of which was so explosive it provided plenty of fodder for the New York tabloids, Strahan has been engaged for the past few years to Nicole Murphy, who has five children from her marriage to actor Eddie Murphy. Between Strahan and Murphy, the pair have nine children in their blended family.

Appearing on "Live with Kelly and Michael" in 2013 to promote her reality show "Hollywood Exes," Murphy shared 10 things most people didn't know about Strahan, including the fact that he can't "stand to be tickled," once had a pet pig and "Michael loves to spoon."

Such romance is to be expected from a man who is very open about his love of at least one "chick flick."

" 'The Notebook' gets me every time," Strahan told Elle magazine. "It's a great love story. Boy from the wrong side of the tracks. They get on each other's nerves, but they can't live without each other. It almost makes me shed a tear."

Now it looks as if Strahan may be about to bring all that personality to "Good Morning America." He previously filled in for the show's anchor, Robin Roberts, when she was on sick leave.