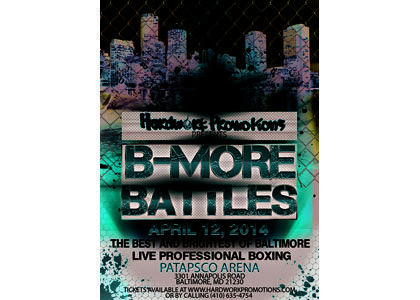 BALTIMORE — If you are a fight fan, you will be happy to know that boxing will make its return to the Baltimore-Maryland area on Saturday, April 12, 2014 at the Patapsco Arena located at 330 Annapolis Road in Baltimore.

The boxing event will showcase talent from the Delaware, Maryland and Virginia (DMV) area. Some of these young boxers are being looked at by big name promoters such as Al Haymon.

The boxers on the fight card include Dwayne McRae, Larry Recio, Chris Haney (pro debut), and Christopher Joseph (pro debut). Also on the bill is promoter and boxer Venroy July whose record is 16-1-2 with 6 knockouts.

“I want Baltimore to support our efforts in bringing quality fights to the area. At one time the DMV was the place to find great fighters. Boxing slipped through the years but it is on the rise. Some of our fighters have already been acquired by promoters and locally we have local guys on the major networks showcasing their talents like Emanuel Taylor who was just on ESPN2,” said July

Venroy "Hardwork" July did not take the conventional path to becoming a contender. In fact, July didn't start boxing until he was already in law school at Duke University, and did so only to stay in shape after wrestling at the University of North Carolina-Chapel Hill. His achievements to date have been attained through hard work, thus his fighting name. In fact, it's that same ethic which forces him to rise every morning to train prior to going to work at an international law firm, where he works 12 hour days on a regular basis doing merger and acquisition transactions.

After making the sacrifices and not seeing the pay off, July decided to use his legal skills to help to advance his boxing career and he created Hardwork Promotions.

He works hard and trains hard due to his undying belief that hard work should pay off. “I love to compete and I love boxing. I want to benefit from what I love to do and want other boxers to do the same. With my background in law I can make sure that things are fair for everyone involved.”

For more information about Hardwork Promotions, visit http://www.hardworkpromotions.com/ or call: 410-635-4754.