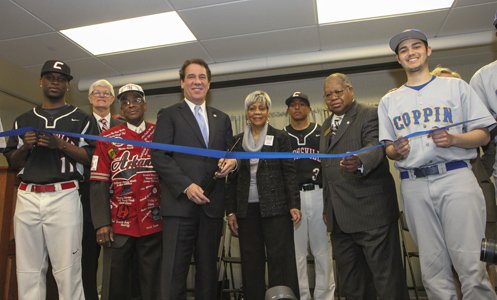 Audrey Simmons, executive director of the museum and widow of Hubert “Bert” Simmons, spoke at the opening day ceremony on March 27, 2014 in Owings Mills. “I’m tremendously happy,” she said. “I only wish that the great Hubert V. Simmons could be here. But I know, they keep telling me, he’s smiling down on all of this.”

The grand opening is the result of the tenacity and years of hard work of both Simmons and Rayner “Ray” Banks, a baseball enthusiast and curator of the museum.

Previously operating under the name Negro Leagues Baseball Museum of Maryland, Inc., it had been housed in various temporary locations, including a church basement since 1996, until Baltimore County offered to give it a permanent home in the new library.

The new facility houses artifacts, photos and memorabilia from the Negro Leagues and is a tribute to Hubert “Bert” Simmons, a Northwest High School graduate who played for four different teams in the Negro Leagues, including the Baltimore Elite Giants in 1950.

Housed on three floors of a new $30 million building, the museum boasts exhibits featuring Leon Day, a Baltimore Elite Giants player elected to the Baseball Hall of Fame in Cooperstown, New York and Mamie “Peanut” Johnson, one of only three women who played in the Negro Leagues.

Five years after his death in 2009, Bert Simmons’ vision of sharing an important part of American history became a reality.

Following his baseball career, Simmons taught in Baltimore City schools for 30 years and coached little league, high school and college baseball for more than 40 years. His wife Audrey said it was always his dream to create a museum to honor the players of the Negro Leagues.

“Bert loved the game, but we must not forget his devotion to education and the well- being of kids in school, “ she noted. “How well I remember his constant efforts to assure that the youngsters who were entrusted to his care learned to appreciate the history of those who struggled to bring equality into the lives of African Americans who had for so many years been denied the liberties that had been promised by our constitution.”

Baltimore County Community College student and baseball player DeSean Rabb, spoke at the opening of the museum and understands the significance of the moment. “For me the Negro Leagues were more than just about baseball,” he said. “In their quest to integrate the major leagues they were also desegregating America game by game. “