Stay-at-home moms are on the rise

For many it's an economic necessity 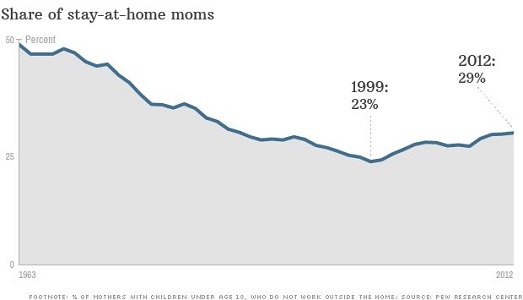 Staying at home with children is on the rise again in the U.S., but this isn't the story of a great cultural shift. More often, it's an economic necessity. CNN

NEW YORK (CNNMoney) — Staying at home with children is on the rise again in the U.S., but this isn't the story of a great cultural shift. More often, it's an economic necessity.

Plenty of mothers would like to work, but they can't find jobs. Even if they do find something, the pay likely doesn't cover the cost of childcare.

Stay-at-home moms had been in decline for decades and reached an all-time low in 1999, when only 23% of moms stayed at home. But that's where the trend stopped, according to a new report by the Pew Research Center.

The share of stay-at-home mothers has slowly been rising for the last 15 years, and it's probably no coincidence -- the first jump coincides with the 2000 recession, and the second occurred during the even deeper economic downturn that started in 2007.

Today, 29% of American mothers are at home.

"There's a big link between what the economy is doing and women's decisions about working or not," said D'Vera Cohn, senior writer with the Pew Research Center.

Forget the image of rich, highly educated women who are simply choosing to stay home because their husbands earn enough to make it possible. This group, sometimes called "opt-out mothers" for their choice to put elite careers on hold, gets a lot of press, but it's actually very small.

The more typical stay-at-home mom in America today is poor.

Over a third of these moms live below the poverty line, almost half have merely a high school level education or less, and 49% are minorities, Pew found.

These are mothers who stay home because they can't find work, they can't afford childcare, and other reasons like cultural preferences, disabilities, or enrollment in school.

"Some people may be surprised that this is a group overall that is not very affluent," Cohn said. "The well-off stay-at-home mothers are really a small slice overall."

For women in general (regardless of whether they're mothers or not), participation in the workforce has risen dramatically.

Cornell University economists Francine Blau and Lawrence Kahn point to a lack of family-friendly labor laws, as a key part of the problem. Twenty-six other countries in the world have higher labor force participation from women, and they tend to be countries that grant long paid parental leaves (not to just mothers, but fathers as well).

The United States remains the only major industrialized country in the world that doesn't mandate some sort of paid parental leave.

What about America's stay-at-home dads?

The numbers are still very small. Among fathers who were either married or living with a partner, only about 6% stayed at home, according to a separate Pew report released last year.

Those ranks will probably grow in the future though, Cohn said.