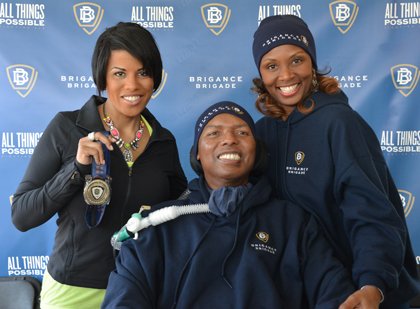 The Brigance Brigade Foundation, an organization that supports ALS (also known as Lou Gehrig’s disease) patients and their families created by former NFL player O.J. Brigance and his wife Chanda, hosted their first annual 5.7K family fun run event on Saturday, April 5, 2014 in the Canton neighborhood of Baltimore City. Over 1,000 runners and their families gathered at Canton Waterfront Park for the event, which raised $110,000 for those suffering from ALS.

In honor of former Baltimore Ravens player O.J. Brigance's jersey number (57), the event featured a timed 5.7K run, as well as a one-mile run/walk, and a Kids’ Fun Run. Greg Skipper, the first place finisher in the 5.7K run, finished in 20 minutes and 36 seconds and was cheered on by O.J. and Chanda Brigance as he crossed the finish line.

After runners completed their respective races they joined friends, family and Brigance Brigade supporters in the Celebration Village held within Canton Waterfront Park. The Celebration Village featured live music from Dreamboat Armada, a Fun Zone for kids and families, and an awards ceremony emceed by WBAL’s Keith Mills. Awards were distributed to the top three 5.7K finishers overall, as well as the top three 5.7K finishers in each age group.

“Chanda and I are overwhelmed by the support we have received from the Baltimore community who came out on Saturday to celebrate with us and participate in the 5.7K event,” said O.J. Brigance, Co-Founder of the Brigance Brigade Foundation. “We couldn’t have hosted this event without the help of some very important groups including all of the Baltimore businesses who sponsored the event, our Board Members and staff, Corrigan Sports Enterprises who took care of all of the logistics, and of course, all of the Baltimore residents who took time out of their lives to help ALS patients in need. We had so much fun and we hope everyone will join us again next year!”

Special guests who joined in the celebrations and showed their support for the Brigances and ALS patients everywhere, included: Mayor Stephanie Rawlings-Blake, actor and Baltimore-native Josh Charles, and Baltimore Ravens offensive lineman Marshal Yanda and his family.

The Brigance Brigade Foundation 5.7K event was held to benefit patients and families battling ALS. Proceeds from the event will go towards furthering the mission of the Brigance Brigade Foundation whose goal it is to equip, encourage and empower people living with ALS by providing access to equipment and services patients and their families otherwise could not afford.